It's the day of our final dress rehearsal, and we're almost ready to bring you into the world of this brand-new play! We've had a talented production team working away to bring the world of JESUS FREAK to life. Keep reading to get to know a little bit about them and their connection to this project! 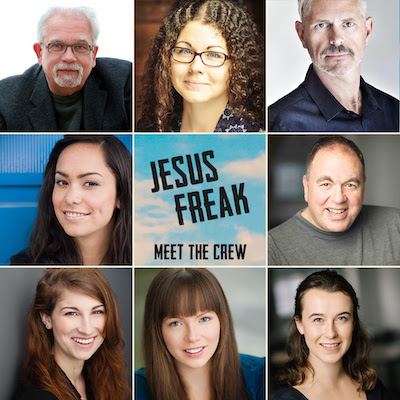 "This play is for our time. We're so fragmented and defensive that we've lost sight of one another. I think the quote from a Sting song sums up my feeling about the play: 'I hope the Russians (Christians, Secularists) love their children too.'"

"Creating 'natural' light is one of my favourite things to do in theatre, second only to magic. People don't realise how much variation there is in quality and colour of 'white' light. I'm very excited for the setting of this show - the deck of a family cabin in the BC wilderness - and what I can do with it."

This is Brian's first design for our unique space, and we're so happy to have him on this project!

Jessica is excited that this show "explores the positive and negative effects of religion on different types of people."

Rick is a current season apprentice, and is adding directing to his list of skills, along with his usual sound design.

As Stage Manager, Samantha has been working tirelessly since before rehearsals began, steering the whole process from inside the rehearsal hall.

"[JESUS FREAK] closely reflects the families and/or situations of many of my friends. It also brings up discussions and asks questions that are current, relevant, and need to be addressed, rather than brushing them under the table. I hope this play will foster closer relationships between people of different opinions through the encouragement of conversation . . . . People begin to heal when others start to listen."

The cast of JESUS FREAK are all familiar faces to PT audiences. In a play centred on family, it's fitting that members of the PT artistic family have gathered together to play the Campbells! 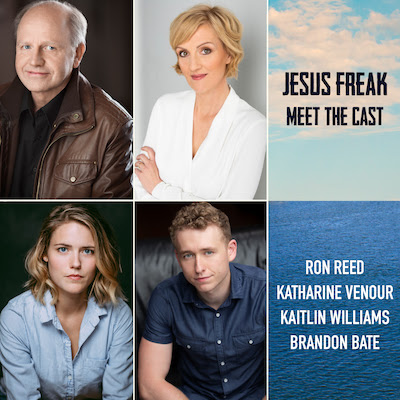 Ron Reed (Alan) is PT's Artistic Director and was last seen onstage here stepping into the role of J.R.R. Tolkien.

Katharine Venour (Susan) served for many years as an Artistic Advisor to the PT Board, and most recently at PT played the role of Vivian Bearing in WIT.

Kaitlin Williams (Clara) has expanded her repertoire into the world of directing and most recently directed the sold-out run of KIM'S CONVENIENCE, which opened this season. Her most recent PT role was Kay in CORLEONE: THE SHAKESPEAREAN GODFATHER.

Brandon Bate (Nate) last performed here alongside Katharine in WIT. He's also part of Cave Canem Productions, which will be bringing the next show in our season to life: CHERRY DOCS by David Gow.

Brandon shared with us a little about his personal connection to this play: "I've been a Christian my whole life. I resonate with the characters' struggle of trying to get along with people and remain peaceful, while still asking for respect and dignity. It's a difficult balance of speaking up for what you believe, while still choosing to listen first and let others express themselves without getting threatened or defensive."

We're just a week away from the preview performance of JESUS FREAK. We can't wait to bring this brand-new play to all of you! Here are some fantastic promo photos from Emily Cooper, featuring Brian Ball's gorgeous, Emily Carr inspired set (in progress)! 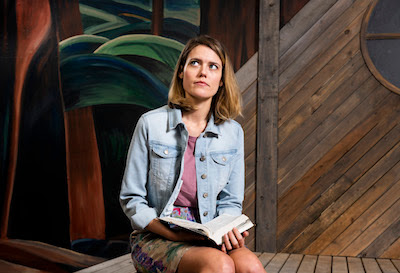 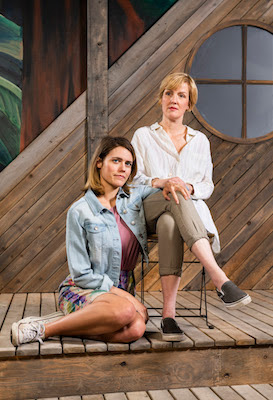 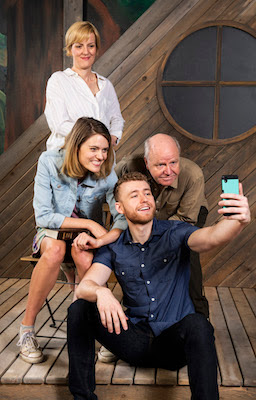 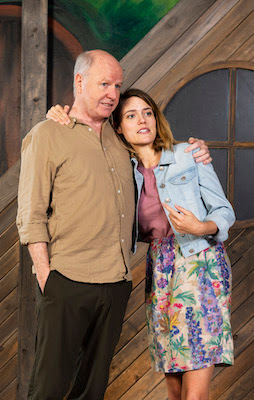 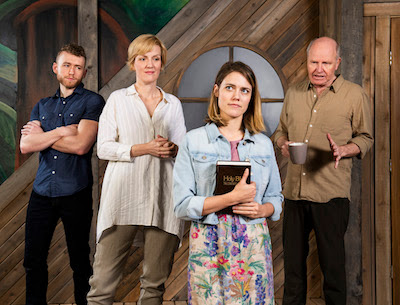 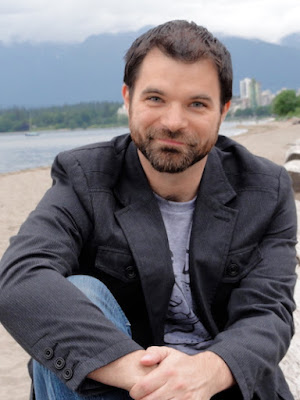 Peter Boychuk is the playwright of JESUS FREAK, which is receiving its premiere production on the Pacific Theatre stage from March 1 to 23. JESUS FREAK is the first of Peter's plays to be produced here, but he's been a key player in other brand new plays on the PT stage. 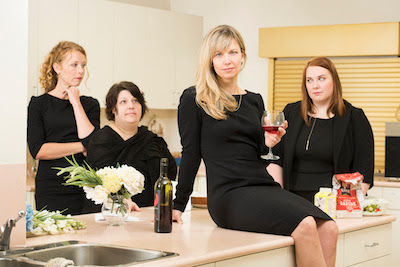 Peter worked as a dramaturge on Shauna Johannesen's COMMON GRACE- part of the 2015-2016 season. 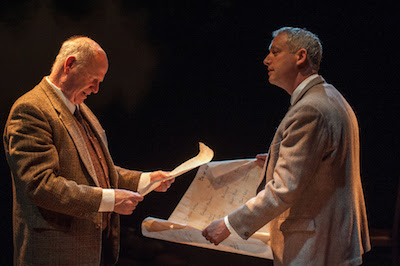 He also had dramaturgical input on Ron Reed's TOLKIEN this past spring. Peter’s plays include FRITTERS IN KANDAHAR (Lunchbox Theatre), SHELTER FROM THE STORM(Touchstone Theatre), L'ÉLECTION (Théâtre la Seizième), AFTERGLOW (published in Two Hands Clapping), and FORTUNATE SON (Vancouver & Victoria Fringe Festivals). He is developing a science fiction musical with Steven Greenfield and works frequently as a dramaturge, most recently on Shauna Johannesen’s COMMON GRACE here at Pacific Theatre and Julie McIsaac’s THE OUT VIGIL (Firehall Arts Centre/Twenty Something Theatre). He is an Adjunct Professor with UBC’s Creative Writing department and is Narrative Designer at Archiact, a video game company. Peter holds an M.F.A. in Playwriting from UVic. About JESUS FREAK, Peter says, "There's a lot of me in there. The play takes up subjects that have fascinated me for a long time. I think ultimately the play is hopeful- Clara and her family believe different things, but that doesn't mean they can't be close. I think that's a timely message."
Posted by Paige at 1:08 PM No comments:

Yesterday the cast and crew gathered for the first read of JESUS FREAK by Peter Boychuck. Despite the snow, we made it out and were delighted to hear the premiere production of this script begin to take shape! Here are some pics from the reading. 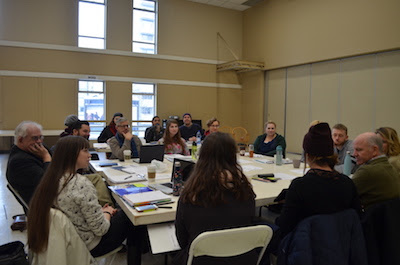 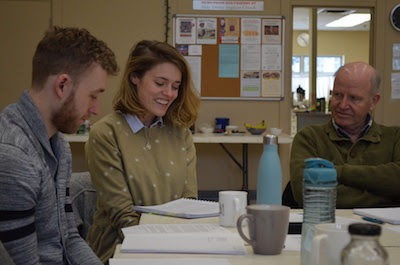 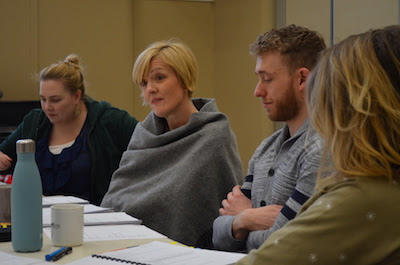 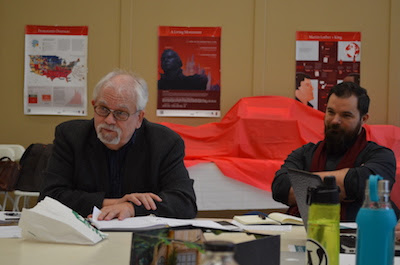 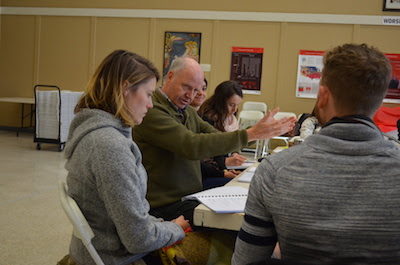 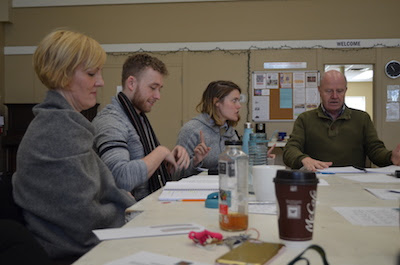 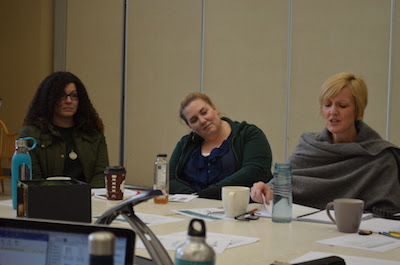 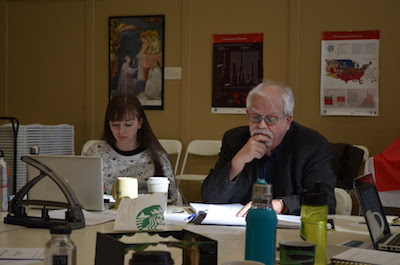 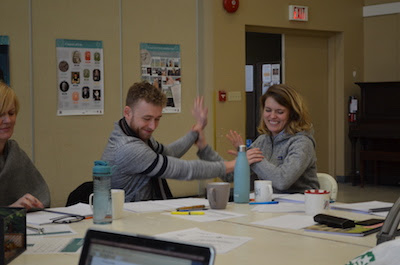 
A few years back I did an interview with Jason Byasee, who was new in town and interviewing some Vancouver Christians whose work caught his interest. I suppose it was a way to get to know the lay of the land in his new city, and to meet people; Jason is a remarkable "connector." In fact, within a couple short years he had built such a remarkable network of relationships here that he ended up on the Pacific Theatre board, as an advocate and "cheer-leader" who is also very smart about leadership and most other things.

I recently heard from a theatre student in Iowa who had read the article and was puzzled about something. Jason summed up some of my meanderings this way: "There are other places where this could have worked, but we’d have been different. I’d have been a different person; I’d have built a different theater. But this place drew me. I’ve often wondered what it would have been like if we’d planted someplace else. But this is the best soil." What did I mean by my cryptic comment about "the best soil"? So this morning in an email I tried to make sense of that.


There have been a number of professional theatres with Christian mandates. Each company is quite distinctive, reflecting not only the attributes of its founder / artistic director, but also somehow suited to the city or region where it is located. Compared to four other such companies operating at the present time - Rosebud Theatre in rural Alberta, Chemainus Theatre on Vancouver Island, Taproot Theatre in Seattle, and Lamb’s Players in San Diego - Pacific Theatre includes in its repertoire plays which are much more “edgy,” and also tends to produce a higher proportion of plays which deal much more directly with Christian faith. Regarding that latter point, I should be clear that Taproot, Lamb’s, and Rosebud all do include a significant number of explicitly faith-related plays, and PT does produce about one a season without any direct religious element (this season, The Wolves; last season, Ruined and Almost Maine) but the other companies are far more likely to present shows which are simply good quality scripts without religious elements. Plays only Pacific would produce Espresso, Jesus Hopped The ‘A’ Train, The Seafarer, The Woodsman, Cherry Docs, etc. Plays the other companies would produce which PT would be very unlikely to choose: Sherlock Holmes and the Case of the Christmas Carol (Rosebud), Arsenic and Old Lace (Taproot), Noises Off (Lamb’s), Little Women (Chemainus).

So my point about soil is that each company (plant) grows in a way that’s suited to the soil where it’s planted. Chemainus is a tourist destination; it avoids any edgy or challenging content, and aims for entertainment. Rosebud has that component, but was also founded with a very strong (and relatively conservative) Christian emphasis (more typical to Alberta than to the West Coast) - and it's near a big city allowing for more challenging content, at least on its small second stage. Lamb’s and Taproot are both in American cities, but originated as part of a vastly larger (and distinctively American) Christian/church subculture than you find in Vancouver, and still serve a core audience that originates in that subculture, so they are more likely to produce some plays which are just good old Americana, and perhaps feel less free to do plays which would likely alienate the core audience they have built. Pacific Theatre, on the other hand, is located in the centre of a very urban, very secular city, and in a theatre community which, apart from the two largest companies, is very edgy (and it's no coincidence that PT's founding artistic director - me - was drawn to and feels at home in that sort of theatre community). And even the Christian community here is far less culturally conservative than you would find in Alberta, or in an American city. So the plant that has grown here suits to its soil; we have the freedom to be much more challenging in the work we present, both because of the artistic community and the city we serve, and also because of the distinctives of the Christian subculture that has grown up here.

As I mentioned, it’s also true that because of my basic artistic interest and, I suppose, my CalArts training, I am an artistic director who is much more drawn to controversial material than some others (though the four I have referenced all have varying interest in / tolerance for such work; in some cases, they simply feel more constrained by other factors).  I just wouldn’t be interested in running a theatre where I was unable to create quite challenging/edgy work. Also, I am not ambitious to grow a large theatre: I very much prefer smaller, more intimate performance spaces, and my aversion to administration gives me no motivation to create a large company with a large staff which needs larger ticket sales to sustain itself. So as well as each company being shaped by its locale, it is shaped by the values and aspirations of its artistic director.

Also, when I founded PT, Vancouver had no other theatre company producing “Christian positive” plays, though that has shifted significantly over the years. But while "our kind of plays" do show up from time to time on other Vancouver stages now, faith-connected work is still our predominant emphasis in, as I have said, a very secular city. So as much as our faith orientation may limit our audience size (which is okay with me), it also creates a distinctive identity in a city with many other theatre companies. Lamb’s Players, Chemainus and Rosebud are in places with considerably less professional theatre, so they tend to produce varying proportions of work which simply serves an audience that just wants to see a good play. In Vancouver, there are many other options for “good plays” - but our faith mandate is distinctive in our city, and in the past 20 years (though not for our first 15) that uniqueness gives us a great deal of visibility (and affirmation) in the cultural community. In a town with dozens of smaller theatre companies, PT is definitely unique, and that distinct identity has attracted and built a very loyal audience. Clearly, the other companies I've mentioned have also forged highly distinctive identities, and in most cases their faith orientation is a significant part of that identity - but PT's programming is just that much more focused on plays that deal directly with those stories, themes, and characters.

My theatre would not have flourished in Chemainus, Lamb’s Players might not have suited Vancouver so well, etc. I probably said to Jason Byasee that "each community gets the theatre it deserves”, which is my tongue-in-cheek way of saying that the company evolves in ways that suit it to the soil (and cultural ecology) in which it grows.