It's almost time for Scrooge and his many companions to take the stage - and this year, all forty-four of Dickens' Christmas creations will be embodied by our own Ron Reed, who also adapted the novel for stage. Long-time Pacific theatregoers may remember our last production of Christmas Carol with director Sarah Rodgers - this year, Ron is teaming up with director Morris Ertman to bring this beautiful work to life.

Tickets are now available online or at the box office (604.731.5518) - including two talk-backs and a relaxed performance on Sunday, Dec 8th! 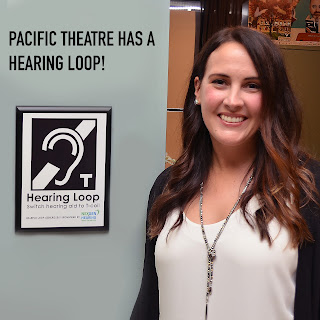 
What is a hearing loop?
A hearing loop system wirelessly transmits audio from the mixing console discreetly and conveniently to the recipient's hearing aids when the “T-Coil” function (found on most hearing aids or hearing aid remotes) are switched on.

How does it work?
A dedicated loop amplifier sends the audio signal into a very thin copper foil that has been invisibly installed under the seats in the auditorium. Anyone within the “looped” area can switch on their hearing aids to the “T-Coil” position to wirelessly receive a very clear and engaging signal directly to their earpiece.
If you don't use a hearing aid, a limited number of receiver units are available for you to borrow for the show!

Relaxed Performances are designed to welcome audience members who will benefit from a more relaxed sensory experience and casual environment, including (but not limited to) patrons with an Autism Spectrum condition, a sensory processing disorder, or a learning disability.
There is a more relaxed approach to noise and movement within the theatre space; some minor production changes may be made to reduce the intensity of light, sound and other effects which might be startling.These shows are for anyone. Many other people may choose to attend a relaxed performance, either as an access requirement or because they like the inclusive environment.
------------
And lastly, a reminder of our financially accessible dates: our previews are always pay-what-you-can, and Wednesday night performances are only $20!

Thank you for coming to Pacific Theatre and joining us in our commitment in bringing as many people as possible into this magical world.

With A Christmas Carol just around the bend, here is a timely excerpt from the preface of "The Man Who Invented Christmas" by Les Standiford. 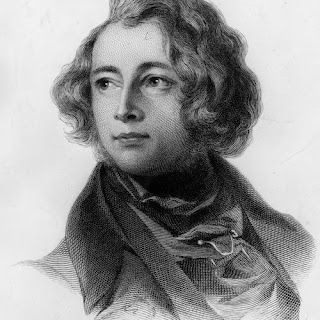 In London, in 1824, it was the custom to treat a debtor little differently from a man who had reached into a purse and stolen a similar sum. In this case, he was a father of seven, and though he was gainfully employed, it was not gainful enough. His debt was to a baker, a man named Karr, who lived in Camden Street, and the sum was forty pounds, no small amount in those days, when an oyster was a penny, a whole salmon a pound and six, and a clerk who worked for a tightfisted miser in a countinghouse might not earn as much in a year.

Accounts were tallied, the sheriff was consulted, and men were sent in consequence. Our father – John his name, and thirty-seven – was taken by the sheriff's men to what was called a "sponging house," a kind of purgatory where those who could not meet their obligations were afforded some few days to seek relief from their creditors' charges, intervention from a person of influence, or possibly a loan from family or friends.

In this instance, help was not forthcoming. Two days passed with no good word, and then our John, officially an insolvent debtor, was passed along to the Marshalsea, imprisoned alongside smugglers, mutineers, and pirates. "The sun has set on me, forever," he told his family as he left.

One who tried to help was a son of John, who, then twelve, took a job, at six shillings a week in a tumbledown factory-house that sat on the banks of the River Thames. One day long afterwards the boy would speak of the place, "Its wainscoted rooms and its rotten floors and staircase, and the old grey rats swarming down in the cellars, and the sound of their squeaking and scuffling coming up the stairs at all times, and the dirt and decay of the place, rise up visibly before me, as if I were there again."

His job was to fill small pots with shoe blacking, and tie them off with paper, and then to paste on each a printed label. The boy worked ten hours a day, standing near a window for better light and where any passersby might see him, with a break for a meal at noon, and one for tea later on. And though the place was grim and the work was numbing, and this had put his childhood to an end, he worked on. For his father was in prison. For a debt of forty pounds. For his family's bread.

"My whole nature was so penetrated with the grief and humiliation of such considerations," the boy would one day write, "that even now... I often forget in my dreams that I have a dear wife and children; even that I am a man; and [I] wander desolately back to that time of my life."

While these words testify to the force of a childhood blow, they also offer reassurance that there would one day come a lightening of his circumstances. That the boy would not spend forever in his dismal occupation, nor would his father stay forever in the Marshalsea, though there were three long months there, with our young man visiting his father in a tiny room behind high spiked walls, and where, the boy recalls, they "cried very much."

And where his father told him "to take warning by the Marshalsea, and to observe that if a man had twenty pounds a year, and spent nineteen pounds nineteen shillings and six-pence, he would be happy; but that shilling spent the other way would make him wretched." These words of caution, and lament, and more, and then at 10:00 p.m. the warning bell would toll and our young man of twelve would walk out into the foggy London night, five miles toward home, and some hours of oblivion before the scurrying, and the squealing, and the little pots of blacking came again.

What perfect timing! JAKE'S GIFT is in town for Remembrance Day week. This beautiful one-person show has played all over Canada for years now, including a short run at Pacific Theatre back in 2011. But the PT roots go deeper; the character of Jake was born in a three week Mask Characterization workshop in 2002, which led to our Christmas production that year, MERCY WILD - with both Julia and Dirk Van Stralen in the cast. Welcome home, Jake! 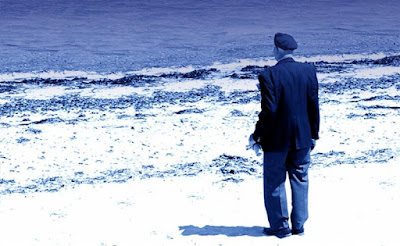 We're deeply honoured to present Jake's Gift on Remembrance Day and throughout the week that follows. Described by playwright, Julia Mackey as a “love letter of thanks to all our veterans”, this beloved Canadian drama will continue at Presentation House Theatre from Nov 11 - 17.

Surprisingly funny, Jake’s Gift tells the story of a Canadian World War II veteran’s reluctant return to Normandy, France, to find the grave of the brother who never came home. While visiting the shores of Juno Beach, Jake encounters Isabelle, a precocious 10-year-old from the local village. Isabelle’s inquisitive nature and charm challenge the old soldier to confront some long-ignored ghosts. At its heart, Jake’s Gift is about the legacy of remembrance that personalizes the story behind one soldier’s grave.

“We’re thrilled to be back in North Vancouver throughout Remembrance Day week to honour our veterans, and the memory of all those young men and women who never got to come home especially in this 75th Anniversary year of D-Day." Julia Mackey, Playwright & Performer

“Moving, poignant, exceptionally funny and timeless ... one of the best pieces of theatre I have ever seen.” Karen Jeffery, Sunset Theatre 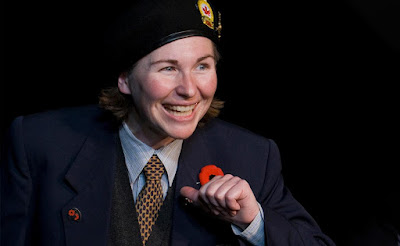 Director Jason Goode shared this with me back in the summer, and I was so moved. The song made its very powerful debut at Christmas Presence a couple years ago, and this video - this short film, really - more than does it justice. Laura and Ryan ("The Kwerks") have become an essential part of our Christmas Presence celebrations, Jason directed the celebrated production of DANNY AND THE DEEP BLUE SEA at Pacific Theatre, and actors Shauna Johannesen (COMMON GRACE, WITTENBERG) and Aleks Paunovic (DANNY) are also PT folks. Such a beautiful piece of film. Three fully realized stories in five minutes? Altman in miniature.


the kwerks
Posted by Ron Reed at 9:35 AM No comments: 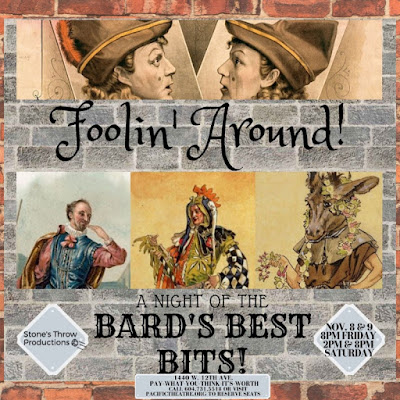 Run Time: 40 mins
Pay What You Think It's Worth After The Show

If you're looking for a laugh and a romp with Shakespeare's best bits, our apprentice project is for you. With scenes from A Midsummer Night's Dream, The Comedy of Errors, Twelfth Night, Hamlet, and As You Like It, we explore Shakespeare's fools in love, fools by profession and fools by accident.

This project came about from a desire to work together on a small project as well as an interest in clowning and comedy. We decided to choose Shakespeare’s works as our playground. Each of us brought two “fools” we’d like to play, as well as a theme song for each character. From that initial meeting, Foolin' Around was born.

We hope to see your friendly faces in the audience!

Thoughts from the director, Julia Siedlanowska:
“If art is not spiritual, it suffers from our human limitations.” -Richard Wagamese
When the apprentices (as each year three artists become lovingly known here at PT) approached me about directing a few of the Bard’s most famous fool scenes, I thought it was a great opportunity to keep my directing and Shakespeare study chops up. Moreover it was a way for me to give back to a program which gave me so very much. I was an apprentice here for the 2015/16 season. I am struck by these three artists: Chantal, Jade and Nicola. In them I recognize my own journey as an apprentice three years ago, how much I grew and changed throughout that year with my PT family, how much clarity and strength I gained, how much more I became because of it. As I see the work that these artists put into their first apprentice project, I look forward to seeing them a year from now, and observing what they’ve learned and how they’ve grown. Today they present you with a myriad of characters that give us the opportunity to see our own circumstances enacted- and perhaps let them go through laughter. Although these characters may be foolish, their feelings are all too real- and hopefully, if we have lived at all- recognizable. I thank you for being here and being part of the journey.
“If you find it hard to laugh at yourself, I would be happy to do it for you.” -Groucho Marx
Posted by Ron Reed at 9:24 AM No comments: