this friday
Whiskeyjar - Viper Central - Shout! White Dragon
SQUARE DANCE!!
WAHOOOO!!!
folks, spring has sprung, and friday is may day! how would you all rather spend the traditional beginning of summer, if not partying and dancing around with three of your favourite vancouver old-time and bluegrass bands, VIPER CENTRAL, WHISKEYJAR, and SHOUT! WHITE DRAGON?

yes, it's true, i never thought this day would come, but here it is: for the first time ever, we're combining forces and playing a triple bill at the beautiful st. james hall! it's a dream come true!! we're having this event to raise money for viper central's great european adventure at the bluegrass festival in switzerland. and our friend elena yeung, bluegrasser and singer-songwriter, will be joining us to call the dance later in the evening. it'll be a night you'll never forget, a night of bluegrassy old-timey fun, the likes of which vancouver has never seen before!!

ELENA YEUNG, who will be joining us and calling the dance, is a talented singer-songwriter and bluegrass banjo player, returning to bc from her cross canada cd release tour, and we're totally lucky to have her come and help out at this event!
thank you all for staying tuned in, and hope to see you on friday night!
Posted by Ron Reed at 8:10 AM No comments:

Check out the video listing for You Still Can't, kindly posted by Simon Ogden of The Next Stage!

Heartfelt congratulations to Aaron Caleb, who was named Trinity Western University's "Davis Distinguished Teacher" at today's Commencement ceremonies.  What an honour!  How well-deserved!  And such perfect timing: Aaron worked around the clock last fall to move us into our new performance space in Freedom Hall, which ended up providing the perfect frame for his magnificent production of "The Good Woman of Setzuan" which closed the on-campus part of TWU's mainstage season - one of the half-dozen most memorable productions I've seen at TWU in 21 years, up there with "All My Sons," "Our Town," and Aaron's own "Taming Of The Shrew," among others.
A heartfelt "standing O" for Mr Caleb!
Posted by Ron Reed at 6:47 PM No comments:

YOU STILL CAN'T: The Company 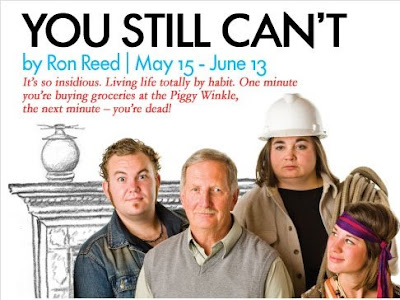 Also gratifying to think about the cast of Emerging Artists we've pulled together for this show. Andrea Loewen, Christie Maxson and Laura Van Dyke are this year's crop of PT apprentices: you heard Laura breathe in MOURNING DOVE, and saw her in REMNANTS and YOU CAN'T TAKE IT WITH YOU, but the other two will be making their mainstage debuts.

The show is a co-pro with the TWU Theatre program. We're featuring Kat Gauthier, Alex Voicu and Shalyn McFaul (who were in REMNANTS), Philip Miguel (the IRS man from YCTIWY), and Kyla Ferrier in her first PT role. Also back from YCT (notice how even the abbreviation gets abbreviated?) are Brett Ziegler (who played his own grandson), a keyboard veteran of many a CHRISTMAS PRESENCE; Glen Pinchin (who played his own father), a graduate of the UCFV theatre program; and Debra Sears (who was the Princess Olga Katrina last year), a Pacific Salt Company and Stones Throw Productions veteran!

Mack Gordon, Peter Carlone and Chris Wilson come to us from the University of Victoria BFA program, and Byron Noble is immersed in the Studio 58 program. Tim Bratton is a student at Regent College: I'm tickled to see him play Norman, a pirate radio dj character I stole from another of my plays, THE TOP TEN THOUSAND OF ALL TIME - which Tim performed a couple summers ago at the Winnipeg and Edmonton Fringe Festivals.

YOU STILL CAN'T runs May 15 - Jun 13 at Pacific Theatre. Check the PT website for more details, or to buy tickets
Posted by Ron Reed at 9:11 PM No comments:

An intriguing show on its way, featuring two Pacific Theatre regulars. Anthony Ingram is directing: you'll remember him from THE ELEPHANT MAN, HALO, BEGGARS AT THE WATERS OF IMMORTALITY, even THE PACIFIC SALT COMPANY! And Michael Kopsa is in the cast: THE WOODSMAN, SHADOWLANDS, HOSPITALITY SUITE. Check out the Tempus Theatre website for tickets and more - including swell graphics! 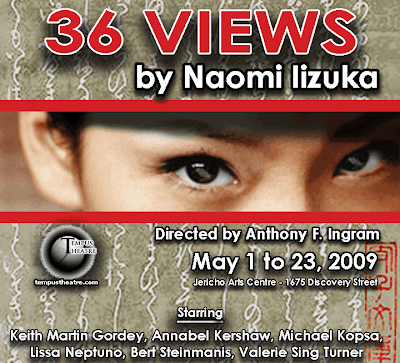 Culture and commodity, fetish and forgery, and personal and professional revenge are all exposed in...

". . . thoughtful, humane, poetically phrased and staged with intricate, shimmering beauty . . . a multi-textured web that became completely engrossing. Each facet of 36 Views offers another perspective on the art and artifice of our lives."
- San Francisco Chronicle. 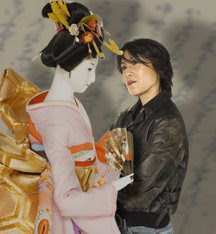 Lars von Trier and THE PASSION OF JOAN OF ARC "Von Trier owes his entire painful career to his Danish countryman Carl Dreyer, particularly his silent classic The Passion Of Joan Of Arc, which deals with the ultimate case of a woman suffering for her faith. What makes the film difficult to watch isn't so much Joan's persecution at the hands of her ecclesiastical tormentors, or even Maria Falconetti's famously expressive performance, which registers her anguish in every crevice of her face. Its disturbing intensity comes mainly from Dreyer's refusal to play by the rules: Defying the most basic tenets of cinematic grammar, which require filmmakers to establish spatial relationship on a 180-degree plane, Dreyer instead constructs the film as a series of extreme close-ups, with little sense of where the characters are in relation to one another. That disorientation, combined with the feverish emotions whipped up by the trial, places viewers in a grim psychic space."

Proceeds will benefit Joy Fellowship, a Christian ministry for people with mental or physical disabilities
Posted by Ron Reed at 8:03 AM No comments:

A quick note to remind you about SIDESHOW at Pacific Theatre this Friday and Saturday night. If you've seen our comedy improv before, you'll remember how great it feels to laugh this hard. And if you haven't, I want to encourage you to celebrate spring with an evening of guffaws, chortles, snorts, hoots, chuckles, howls and giggles. So darn fun.

In the next few days I'll be serving up more soul food over at the blogs. ROMEO & JULIET visit our stage for a few nights next week, THE NELSON BOSCHMAN TRIO plays the Yaletown Blenz Wednesdays and elsewhere, elsewhen over the next couple months, and I'm in the process of posting some tasty bits and pieces at soulfoodmovies and oblations. But before I do any more over there, one more rewrite on YOU STILL CAN'T, which begins rehearsals Monday...
Posted by Ron Reed at 7:38 AM No comments:

There are two other kinds of people in this world. The ones who never miss SIDESHOW, and the other kind. Group One has more fun. The world would be a better place if more people from Group Two moved over to Group One.

Do what you can to make the world a better place. 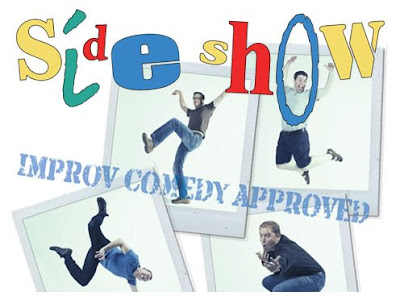 SIDE SHOW
Friday April 17 - Saturday April 18, 8pm at Pacific Theatre.
comedy improv with a dash of chaos. Good clean fun for the whole family with our zany friends from around the city. Let the games begin!

Kerri Norris, Stephen Elcheshen, Frank Boyle are all Shadows & Dreams stalwarts, known best for their summer Shakespeare in the park in New West. 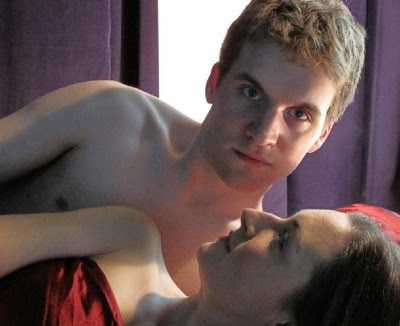 Juliet and Romeo are the children of feuding studio executives in L.A. Goth Juliet thinks that a relationship with the preppy Romeo would be the ultimate way to torment her straight-laced parents. Childish rebellion turns into real love and results in tragedy for everyone involved in the feud. A bold retelling with a little bit of Gossip Girl, a little bit of L.A. and a whole lot of Shakespeare.

About Us.....
This is Shadows and Dreams' fifth production having produced Desdemona: A Play About A Handkerchief at Pacific Theatre, Hamlet at The Beaumont Studios and A Midsummer Night's Dream & As You Like It in New Westminster. They are a regulars in the Sunday Summer Revue at the Bandshell in Queen's Park (New Westminster) and are in pre-production for The Comedy of Errors which will be performed there at the end of July/beginning of August 2009.
Posted by Ron Reed at 6:32 AM No comments:

Plenty of chances to hear PT's favourite jazzman in the next couple months... 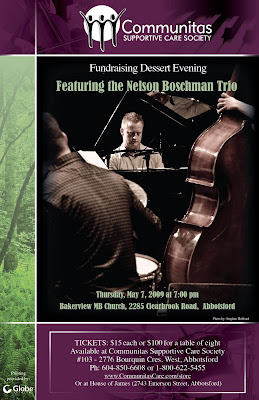 And a few details about the Communitas event...

Communitas is a non-profit organization that offers care and support for people living with mental and/or physical disabilities. The fundraising event raises money for the Communitas programs that do not receive government funding. It is also a great opportunity to educate the public about the joys and challenges of living with a disability.

The Fundraising Dessert Evening is scheduled for Thursday, May 7th, 2009 at Bakerview Church (2285 Clearbrook Road) in Abbotsford at 7:00 pm. The Nelson Boschman Trio will entertain guests with rich jazz music and the evening would not be complete without delicious gourmet desserts. There will also be a silent auction to raise additional money for the non-funded programs.

This event is sponsored by Globe Printers who generously provided printed posters and flyers.
Posted by Ron Reed at 9:18 AM No comments:

It's the final week of A Time to Dance and you're running out of chances to see it. The good news is, if you call the box office (604-731-5518) and tell them that it's "A TIME FOR TICKETS" you can get two tickets for the price of one!

Award winning writer William Hay had this to say about the show:

"Her dance was as varied as her vocalizations and the story rich and captivating from beginning to end. Touchingly telling the tale of this remarkable pioneer of 1930's modern dance and innovator of dance therapy, Libby followed Lisl's life from Vienna across Europe, escaping Nazis to poverty then fame in New York City. Libby was beautiful throughout, bringing the heart, sadness and promise of an era to the little theatre with her remarkable art." 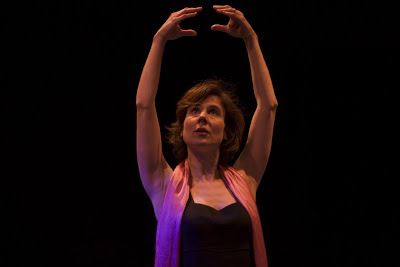