what the dickens? flashmob | win $5K 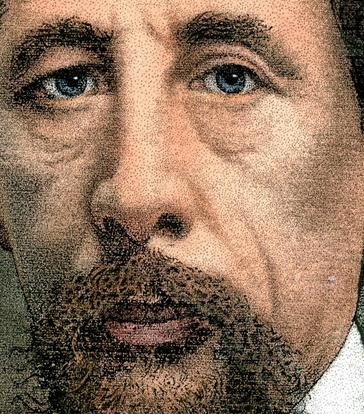 Terry Olson (That's not him in the picture. It's Charles Dickens.) is a long-time buddy whose Creative Gifts Foundation was the first ever to support my playwriting - and in the ensuing decades, has underwritten a lot more play development at Pacific Theatre. Looks like he really likes giving away money - here's his latest scheme... 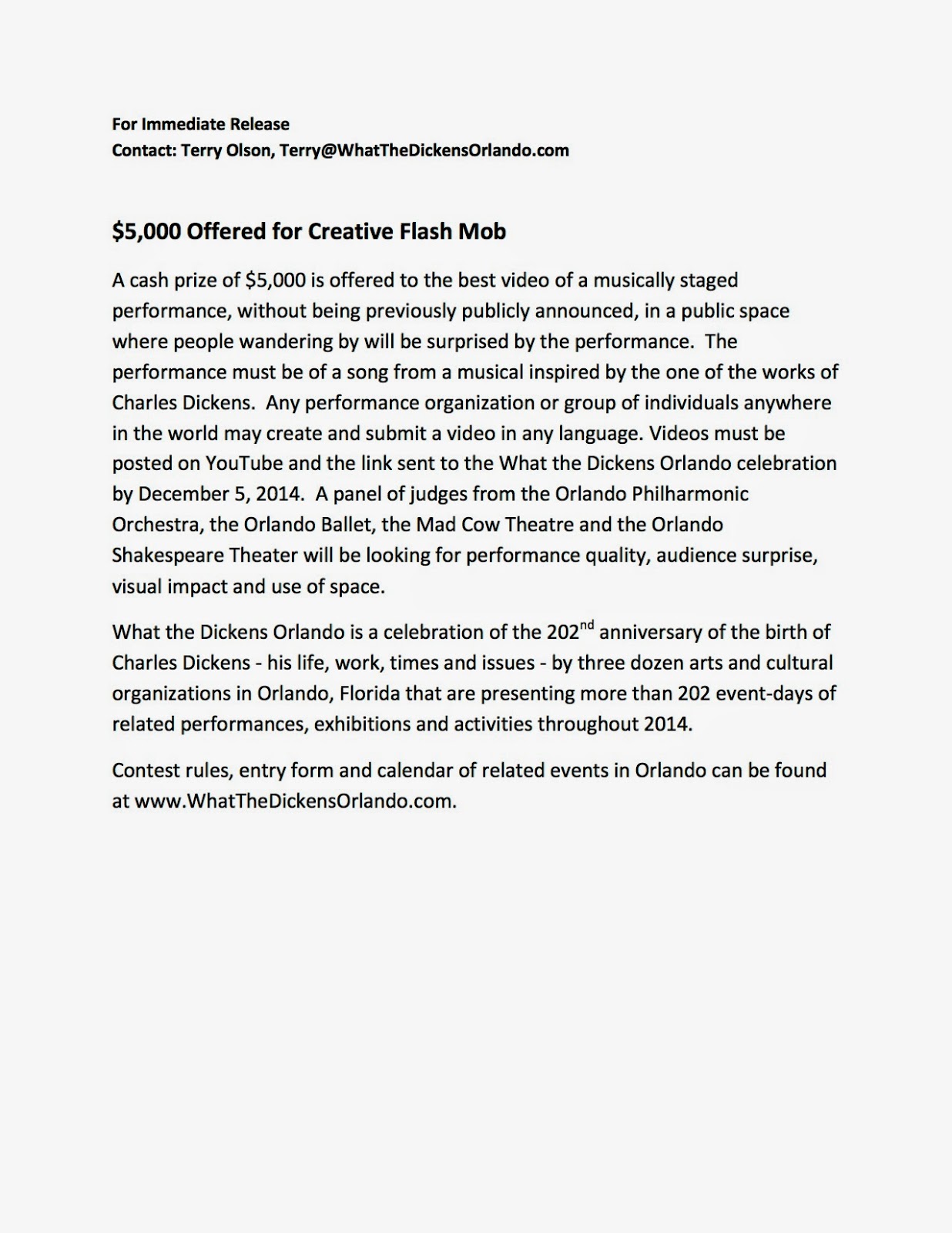 You can read lots more about it at the What The Dickens web page. Get going! Get creative, get rich, get famous.
Posted by Ron Reed at 11:14 AM No comments:

Email ThisBlogThis!Share to TwitterShare to FacebookShare to Pinterest
Labels: Community

This week in the Summer Playground Series is Cara Cunningham's AUGUST IN THE SPRING! 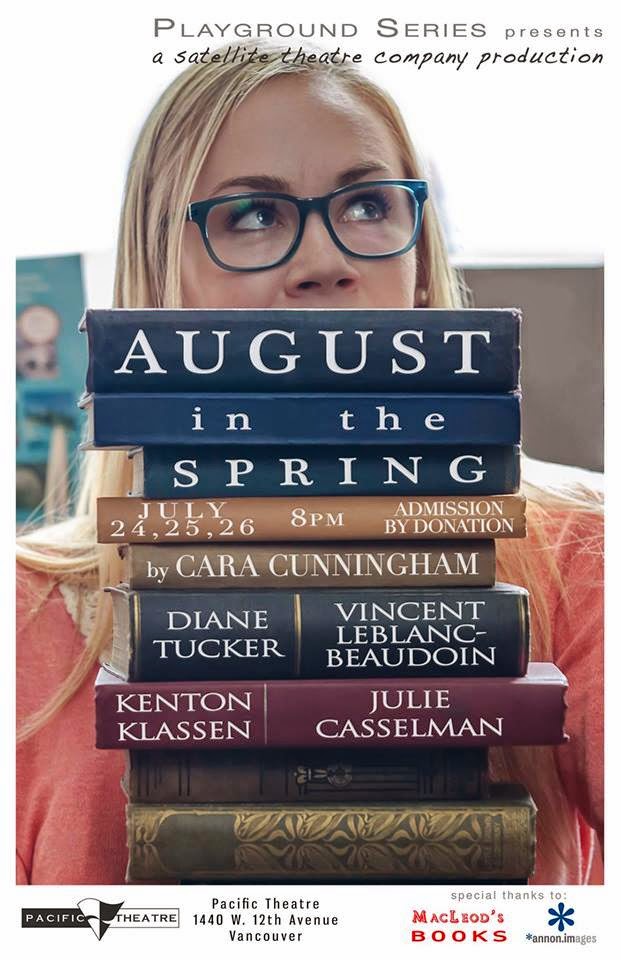 August is a bright student who has recently been diagnosed with Aspergers. She has her sights set on grad school, but her country club mother has other plans - finding August a man. A whirlwind of dating and awkward, this new play features Julie Casselman, Kenton Klassen, Vincent Leblanc-Beaudoin and Diane Tucker.

Posted by Andrea Loewen at 2:21 PM No comments:

Remember JP Allen? CalArts buddy of mine. Acted with me in his play "The Casino" in the 1989 Fringe. Directed "Voice Of The Prairie" way back in 1994, played the title role in "Macbeth" in spring 1996, with PT artists Dirk Van Stralen, Tim Dixon and Erla Forsyth - and during his time here for "Macbeth," he staged his one man show "Gambling." More recently, JP directed Shalyn McFaul and me in "The Disappearing" a few summers ago (as part of a double feature at PT, along with Philip Miguel's production of "The Casino" with John Voth, Robert Salvador and Mary Eden). Closing night of that project we screened JP's film "Centaur."

Well, JP has another movie completed, "Love And Demons" - this one starring Lucia Frangione and Arnica Skulstad Laurice. Come join us for the Canadian premiere screening!

FIRST VANCOUVER SCREENING, with writer/director JP Allen, actor Lucia Frangione and producer Cathy Montosa, IN PERSON for Q and A.

Okay, I'm going to give you a bit more. Mick LaSalle, at the San Francisco Chronicle, is a substantial film critic. Here's some of what he wrote about the film;

"Love and Demons" is by writer-director by J.P. Allen, who is staking out his own particular area of cinema with this, his second feature. It's a cinema that is up front about its storytelling, that doesn't try to make you forget that you're watching a movie. As in the theater, Allen will use direct address, with characters talking into the camera about what they're thinking and feeling. At the same time, there's a lyrical quality, both in the writing and the camera work, with sequences that are dreamy and elliptical.

"This is adventurous filmmaking. Uninhibited by a tight budget, Allen is pursuing a specific and distinct vision; and for the most part, he's succeeding. This is a director worth watching.

"Set in San Francisco, "Love and Demons" is a relationship comedy, as witnessed from the viewpoint of two demons who stand on the sidelines, sometimes trying to help, sometimes trying to destroy the people they're following. Allen himself plays the male demon, who oozes self-satisfaction and menace in the opening monologue.... He is his own best asset - funny, shrewd and a little unknowable.

"Allen's moral inquisitiveness maintains interest. Basically, what we have in Love and Demons is a collision of sophisticated thought and minimal means - an adult vision with a guerrilla theater budget. I'd prefer that any day to big-budget stupidity, but someday I'd really like to see what Allen could do with a blank check."
Posted by Ron Reed at 3:15 PM No comments:

The Teens also were inspired by myths and legends this week and based their final show around them. It was a wonderful week for camp here at Pacific Theatre and the Teens final performance was awesome! 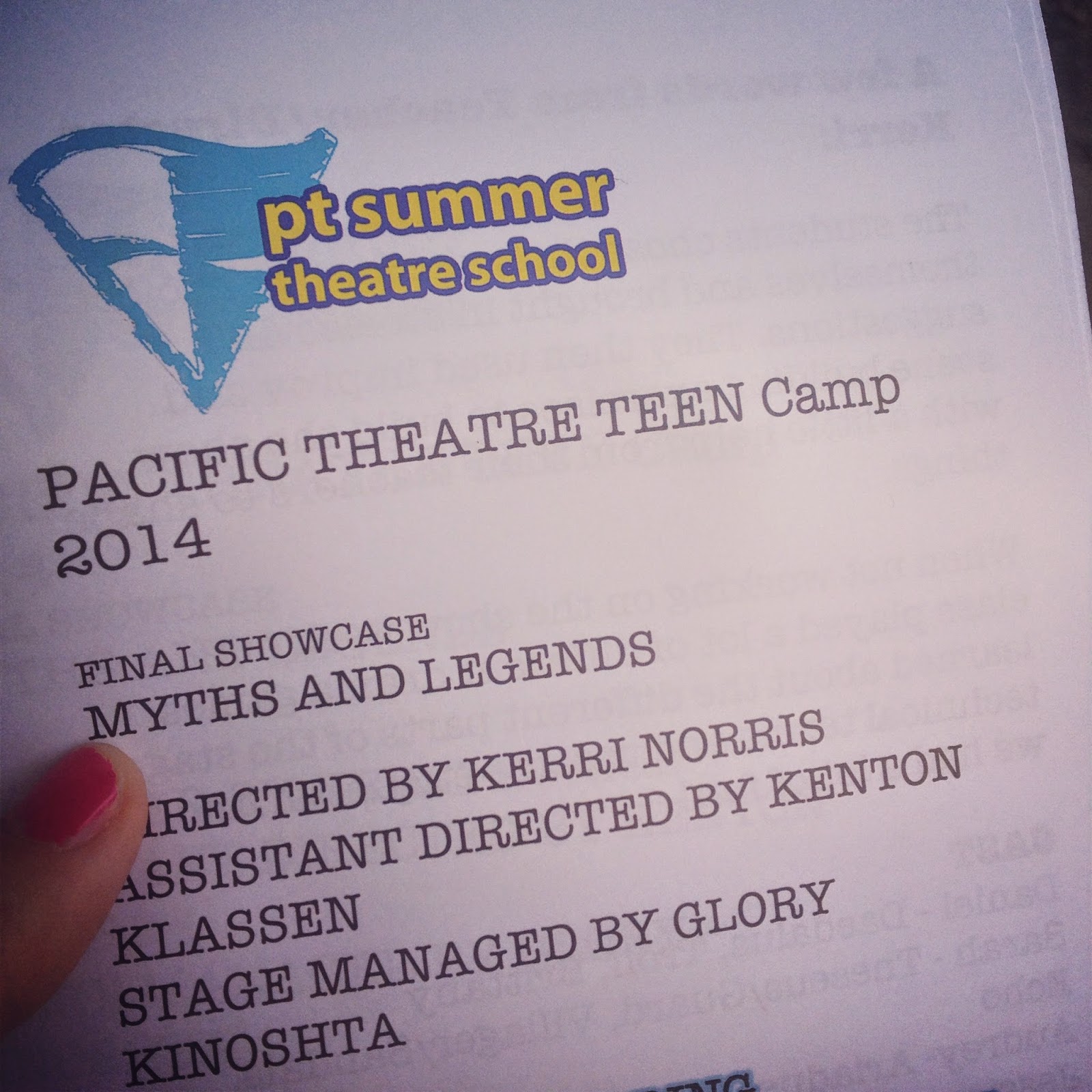 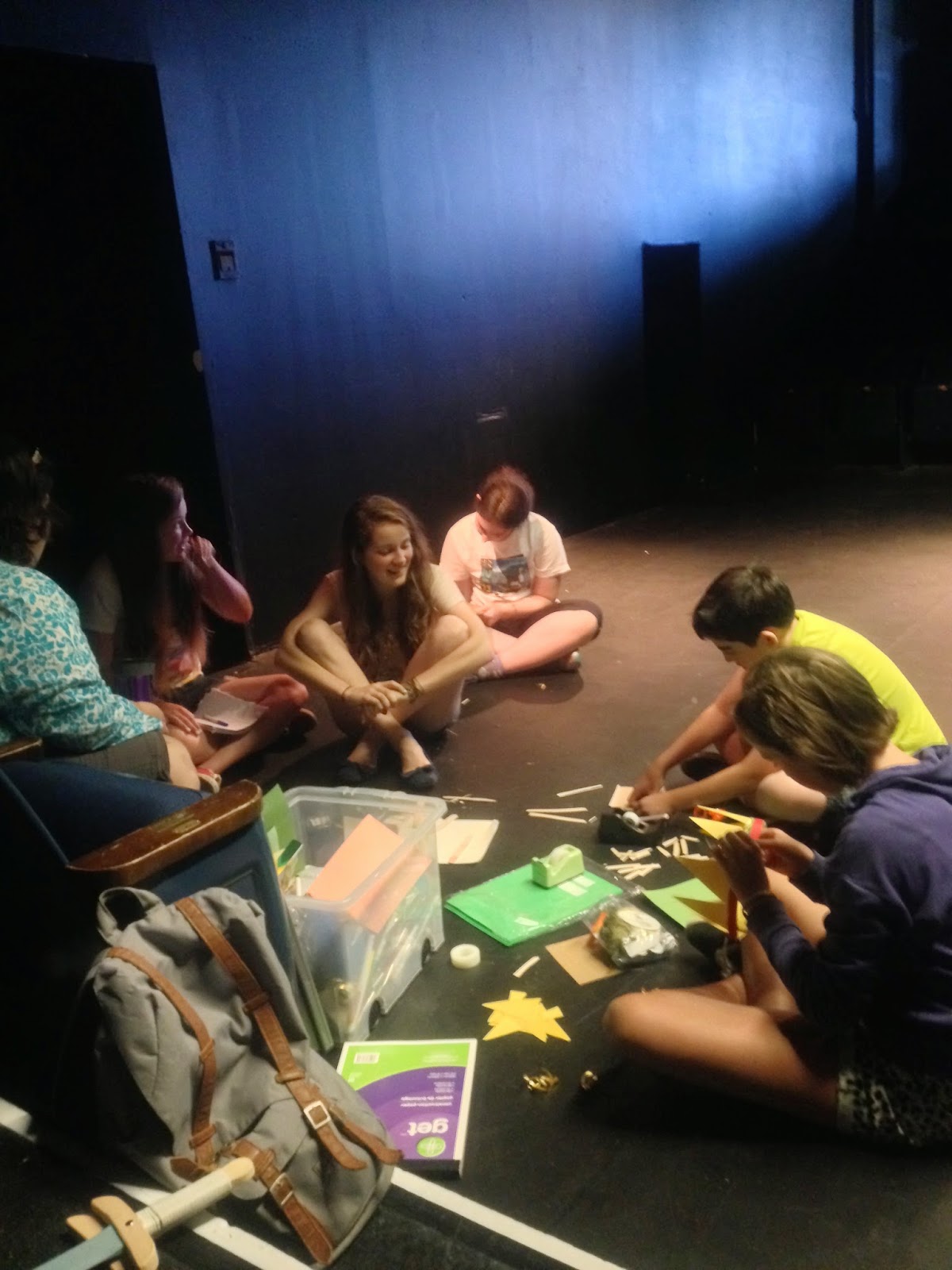 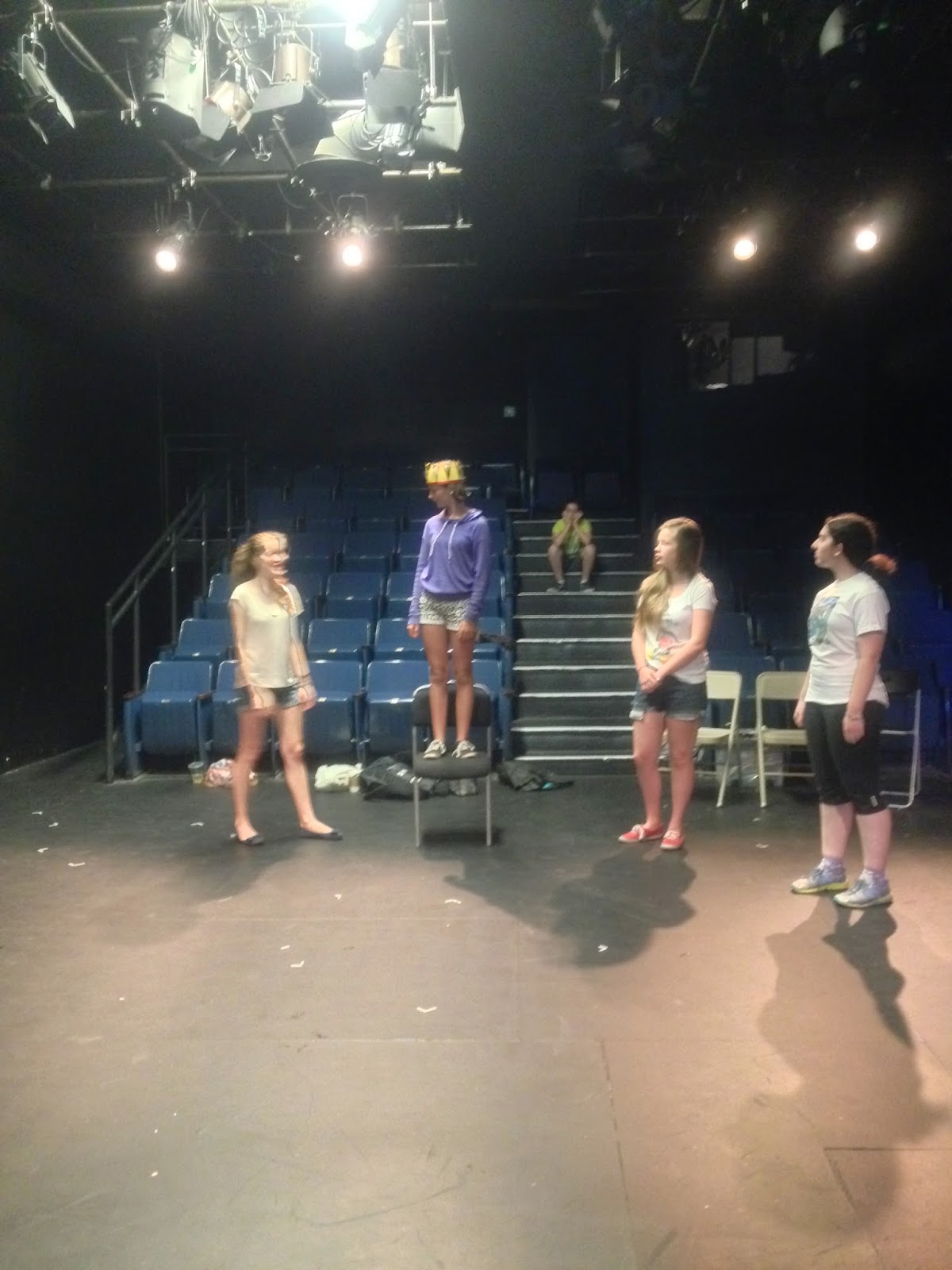 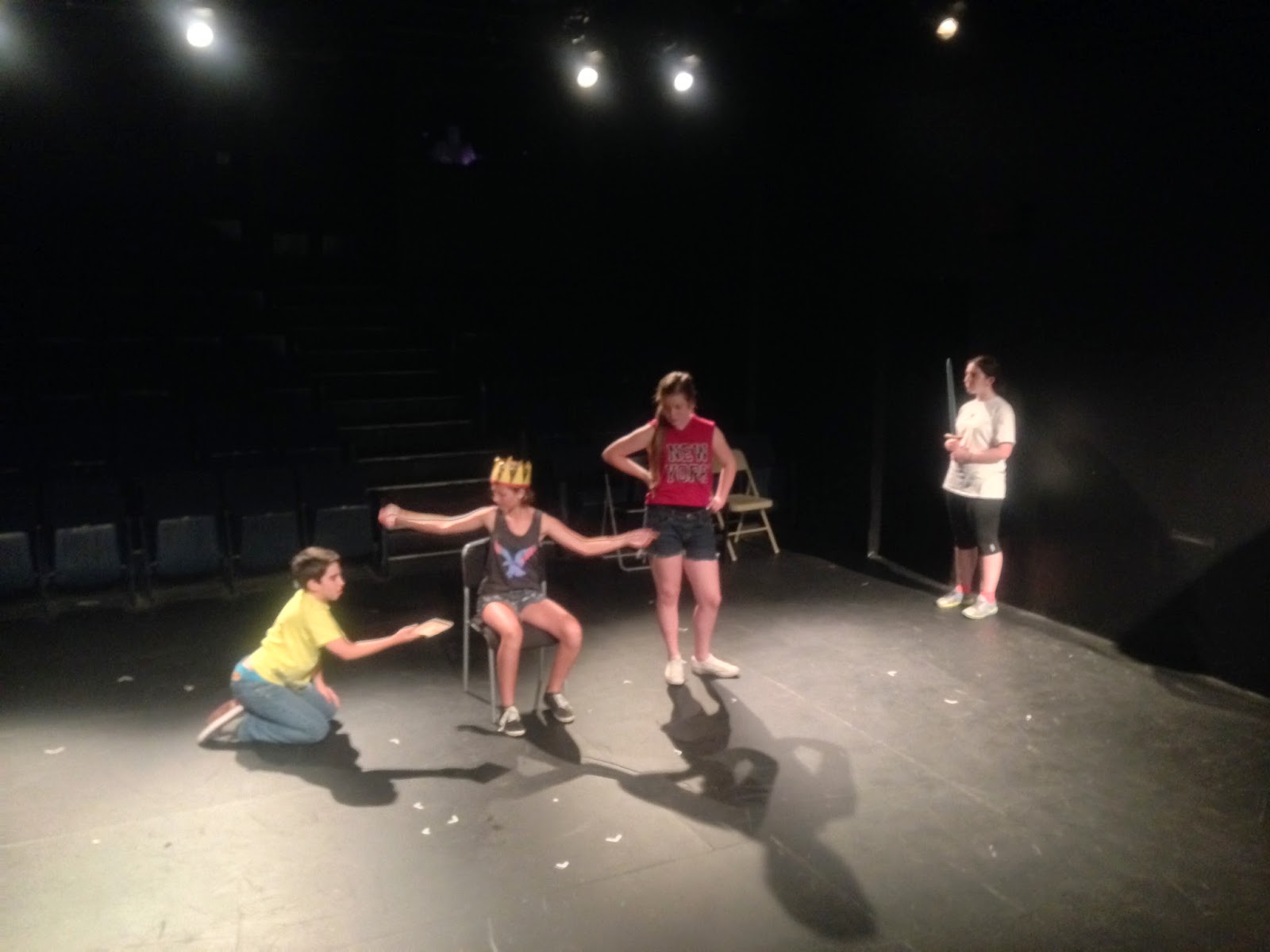 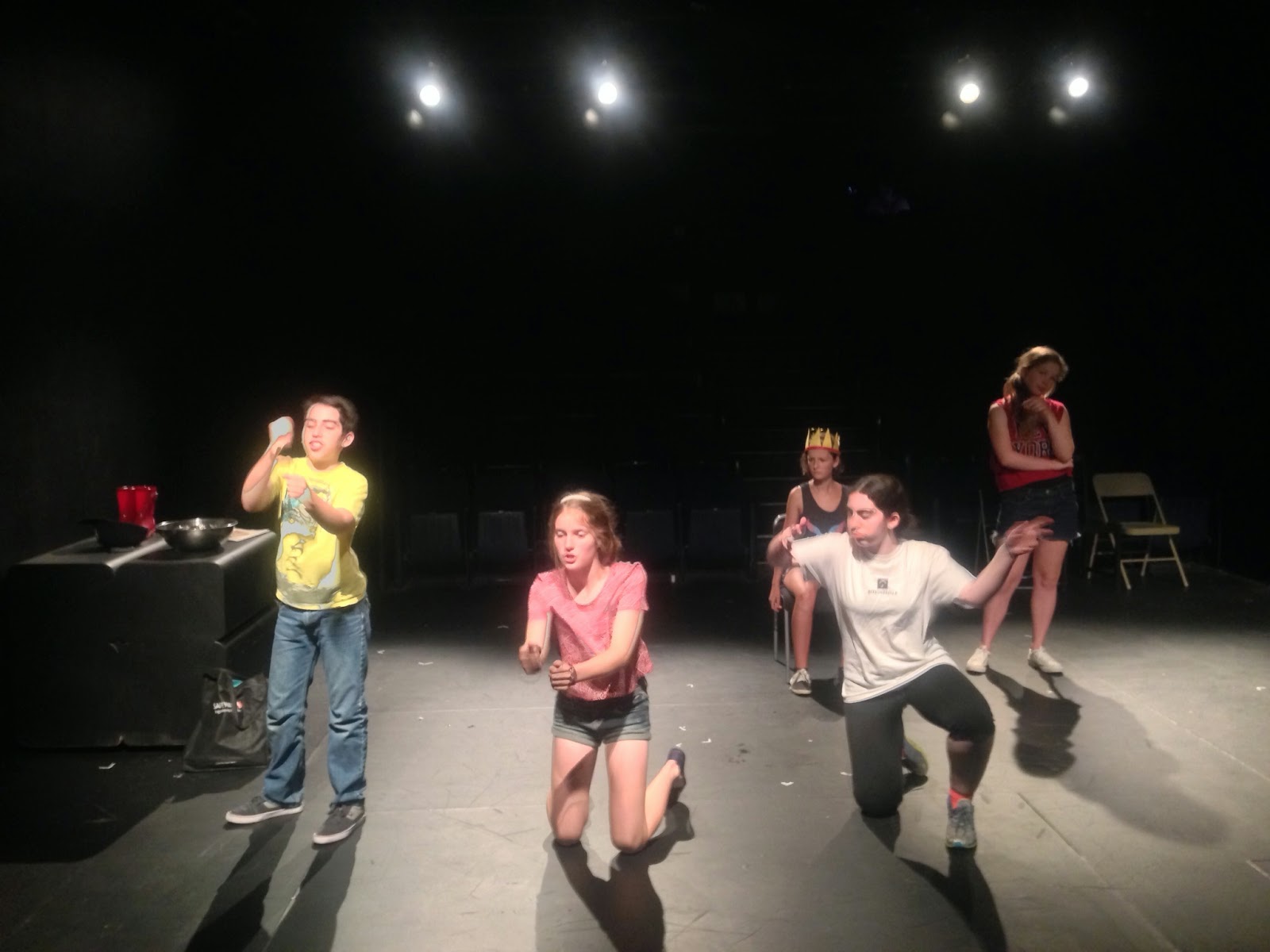 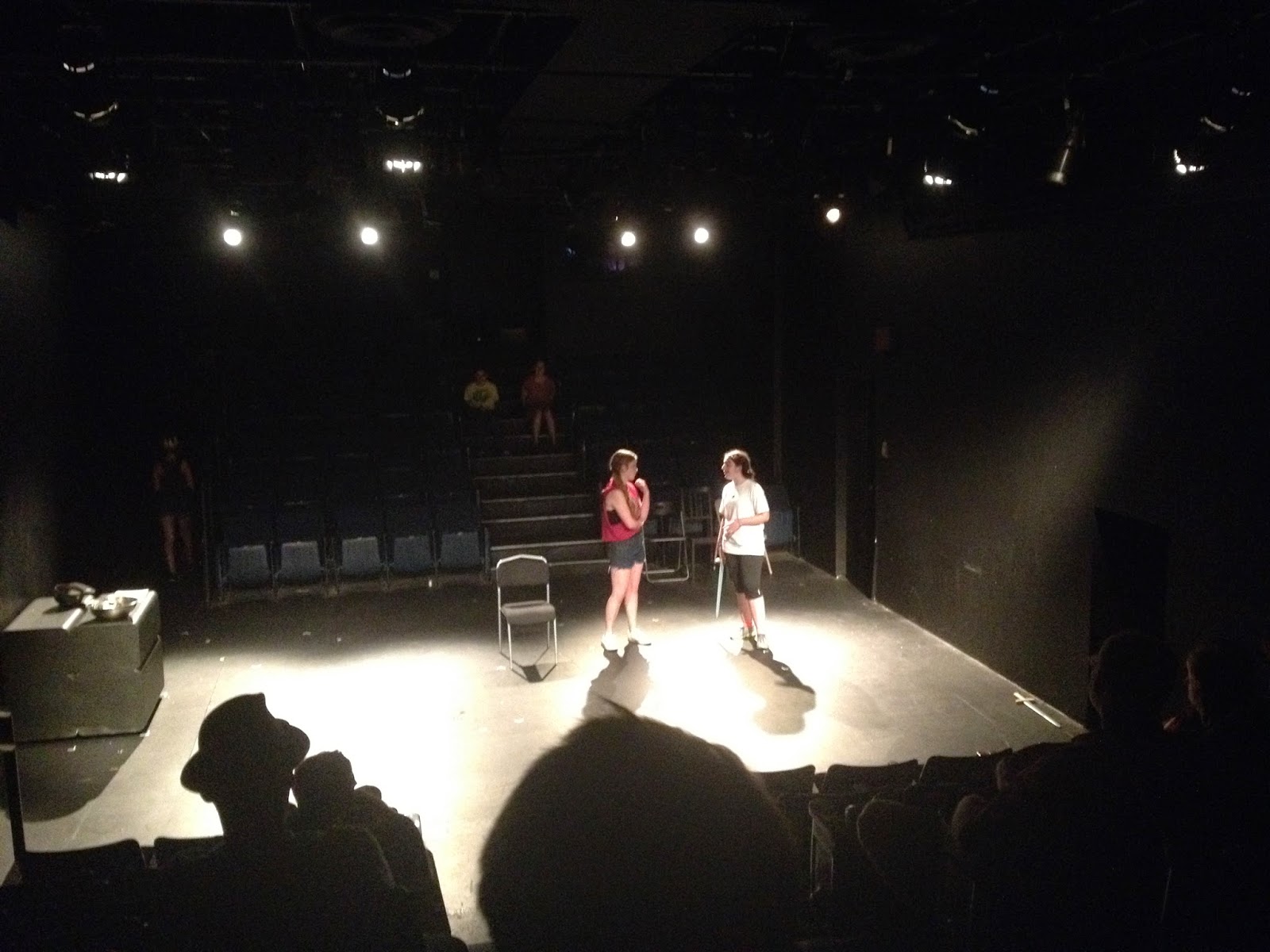 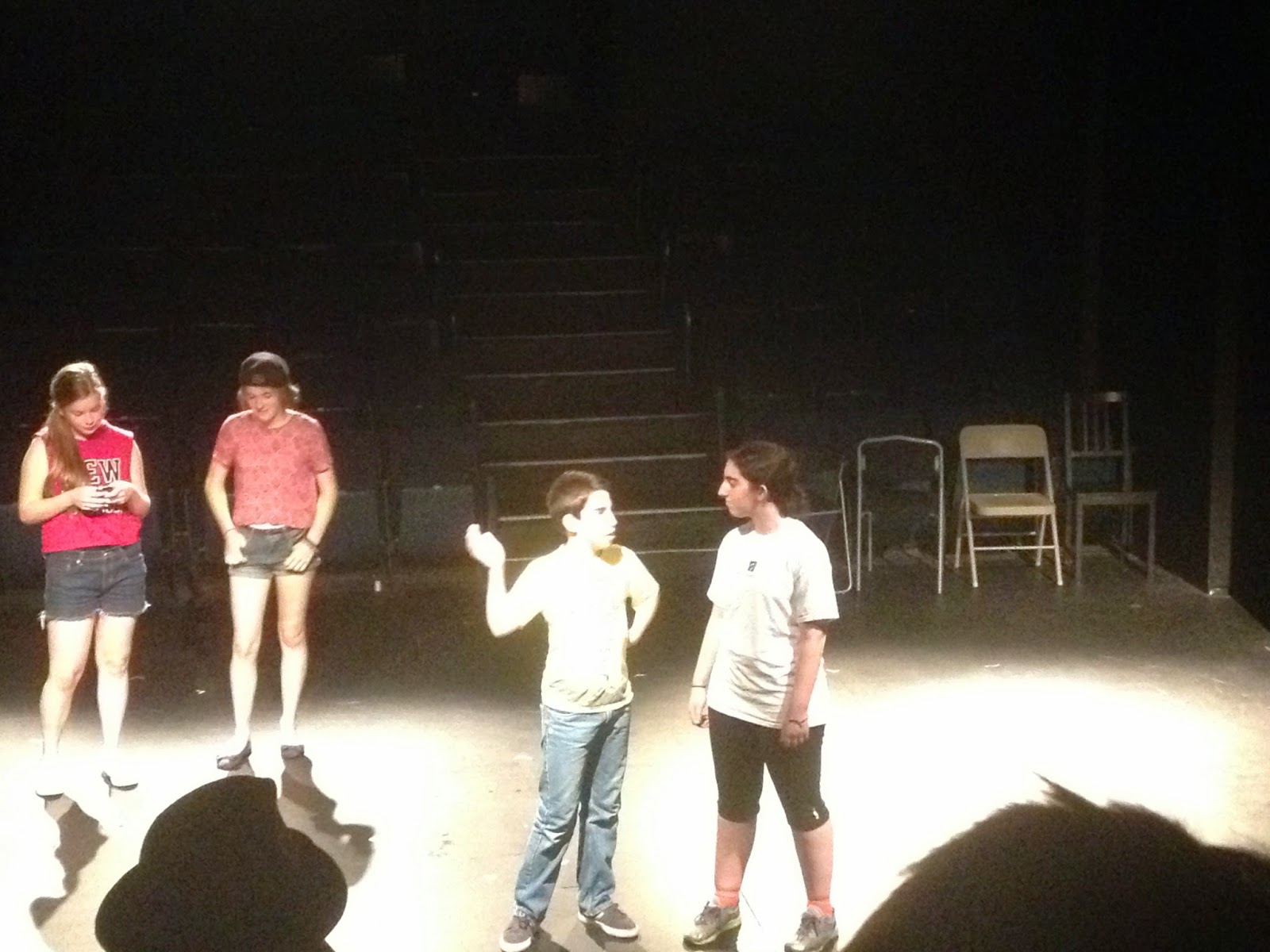 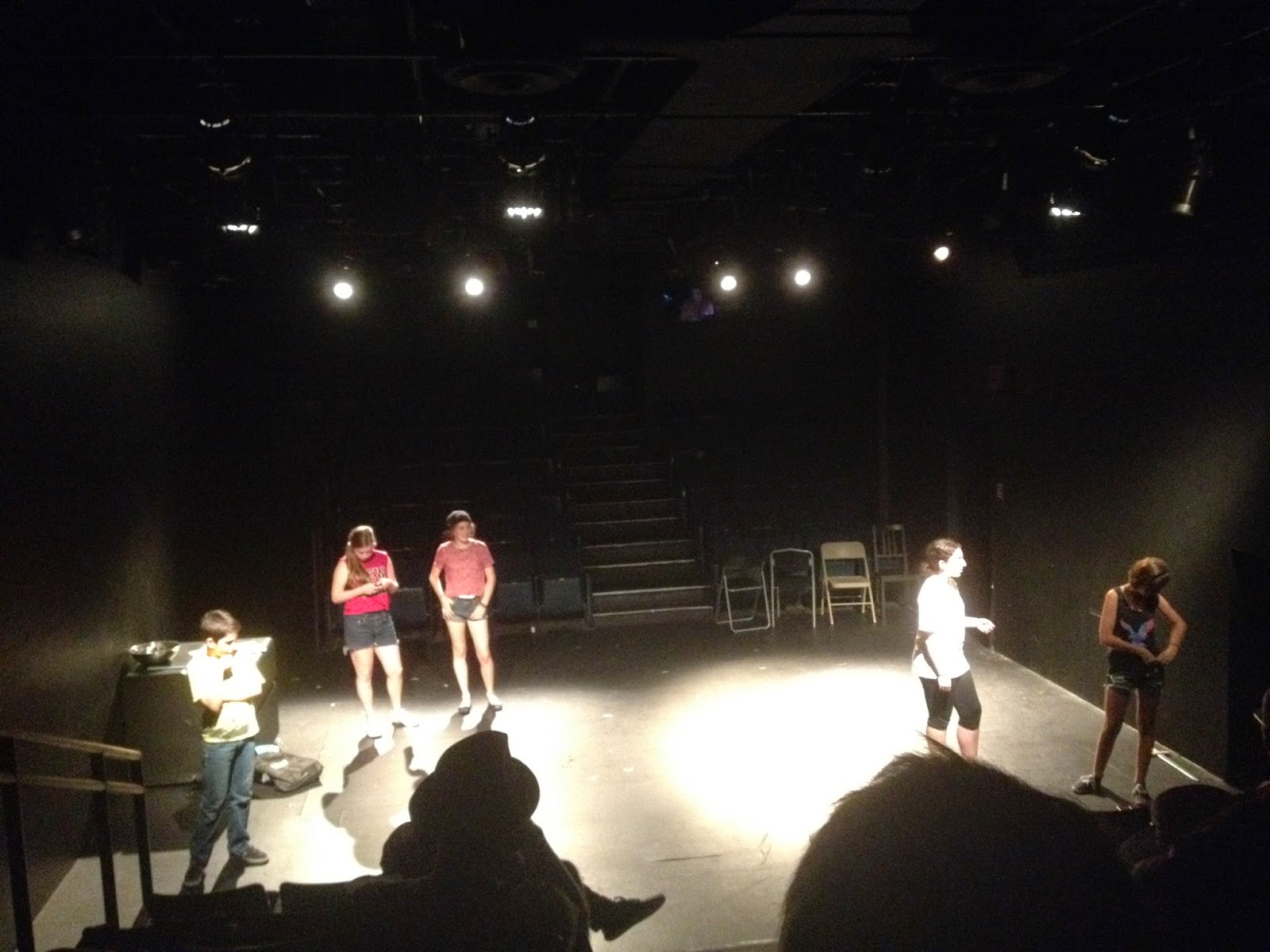 Posted by cara cunningham at 3:38 PM No comments:

Here is a look at the awesome show the kids created with the help of teacher Kerri Norris and assistant Kenton Klassen. The show was about famous myths and legends. It was wonderful! 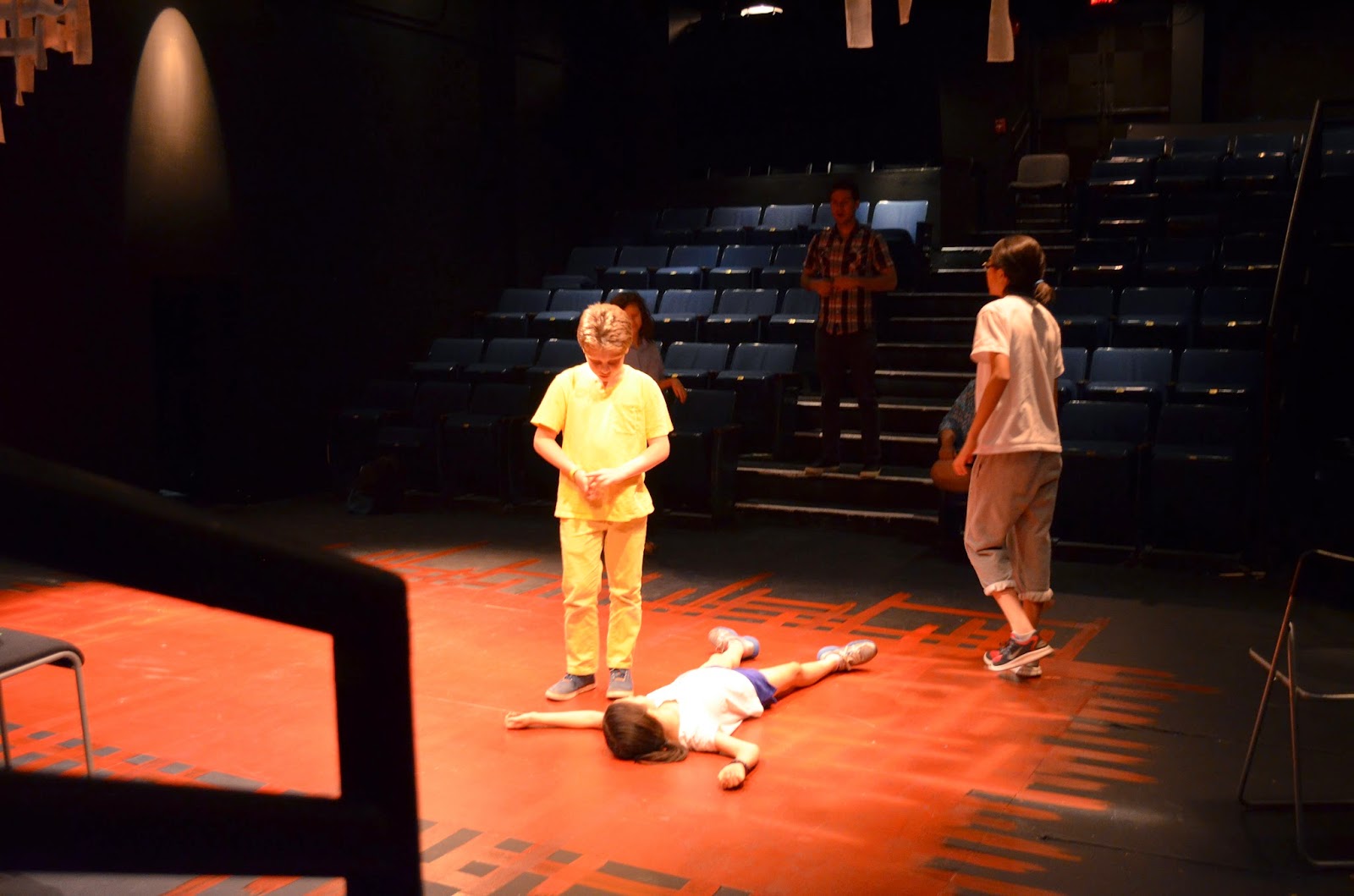 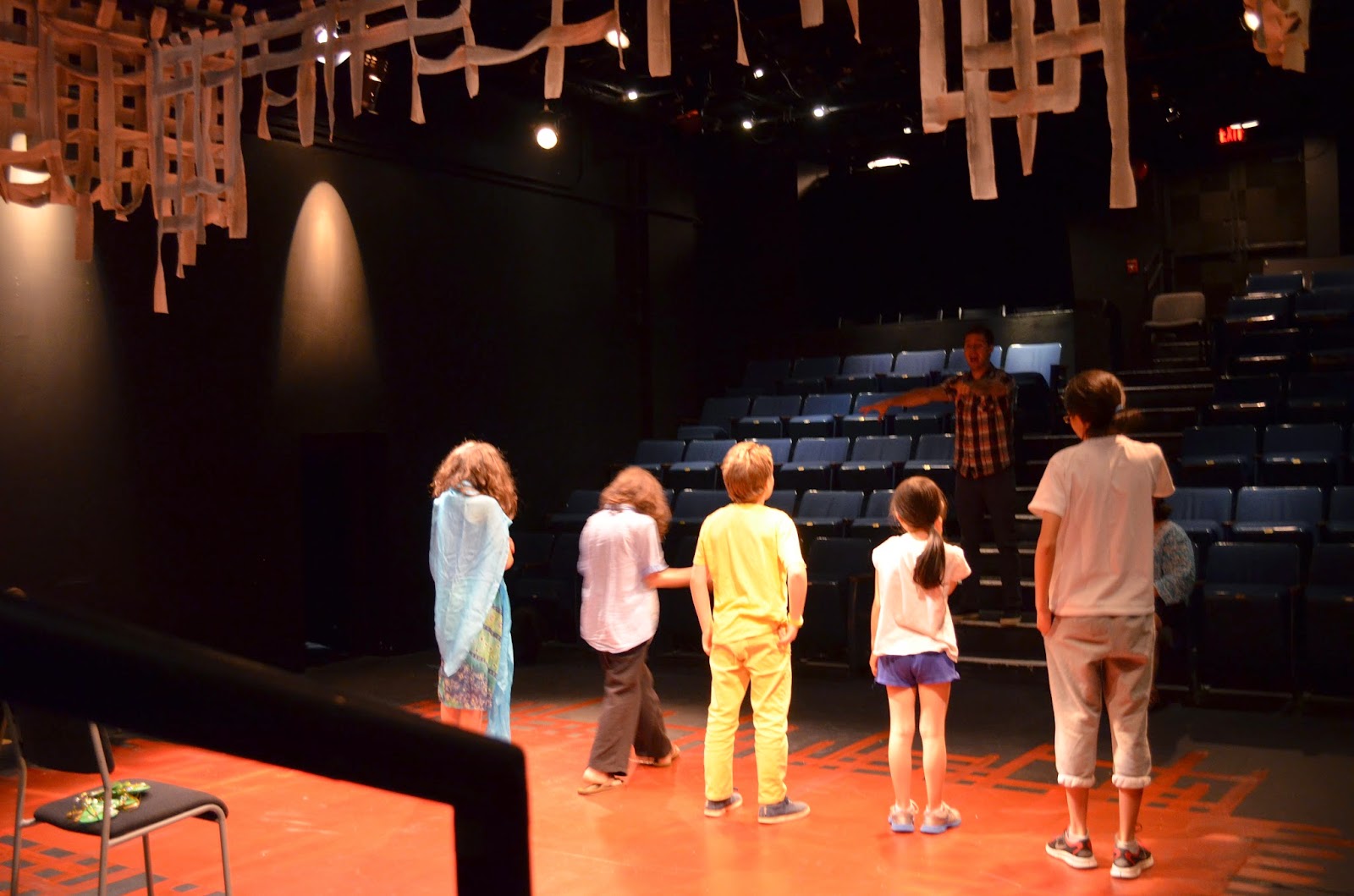 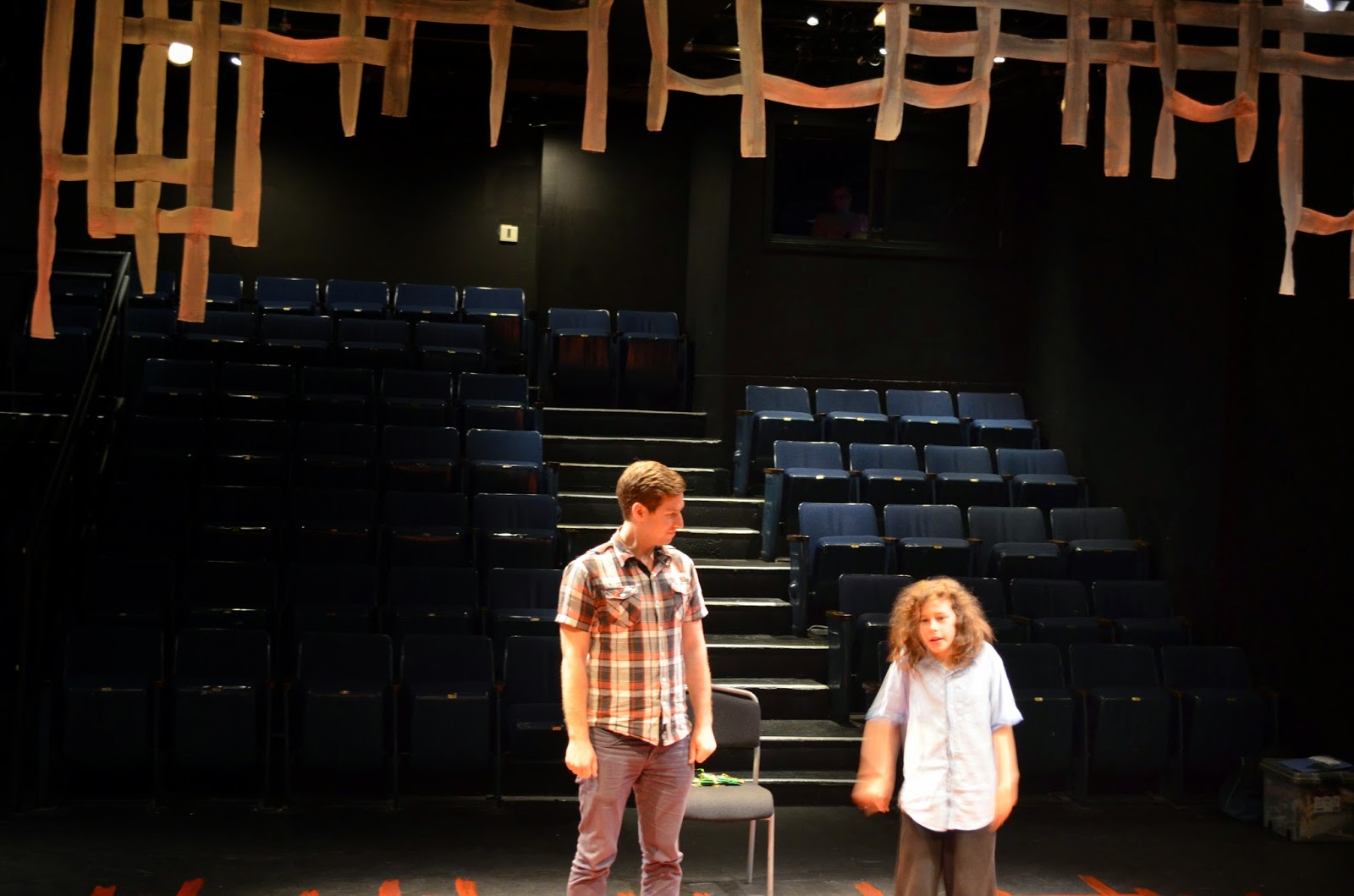 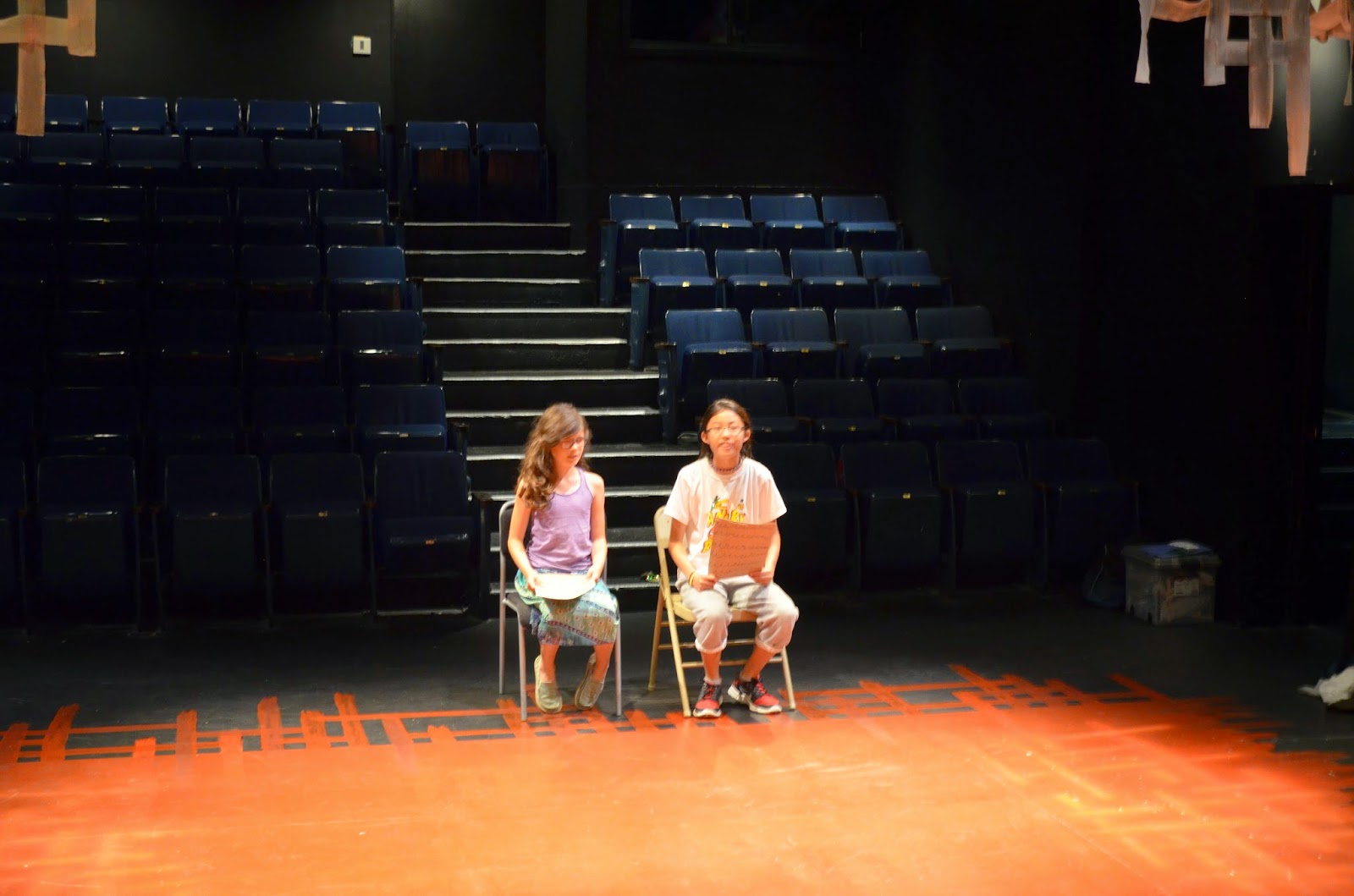 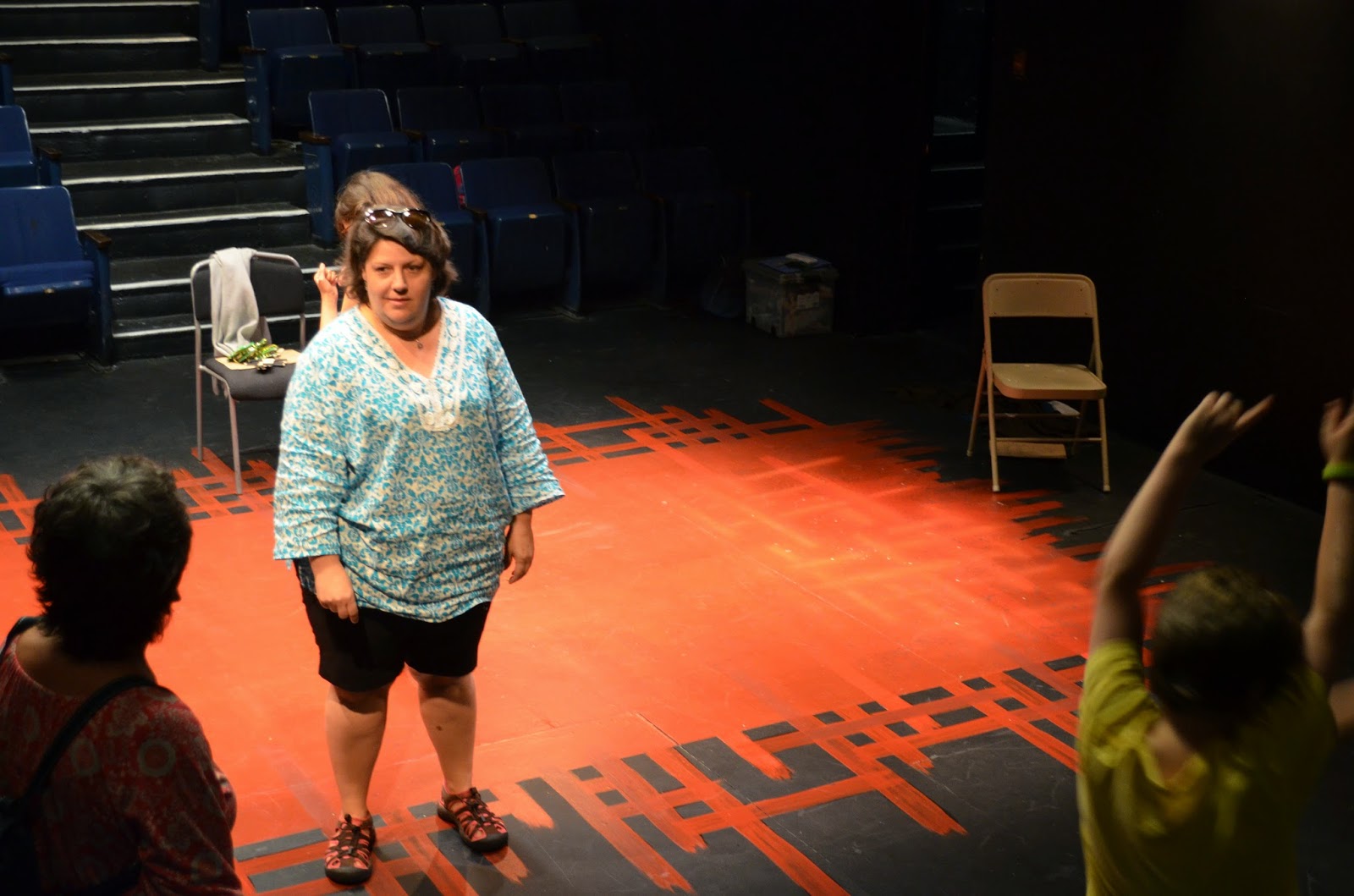 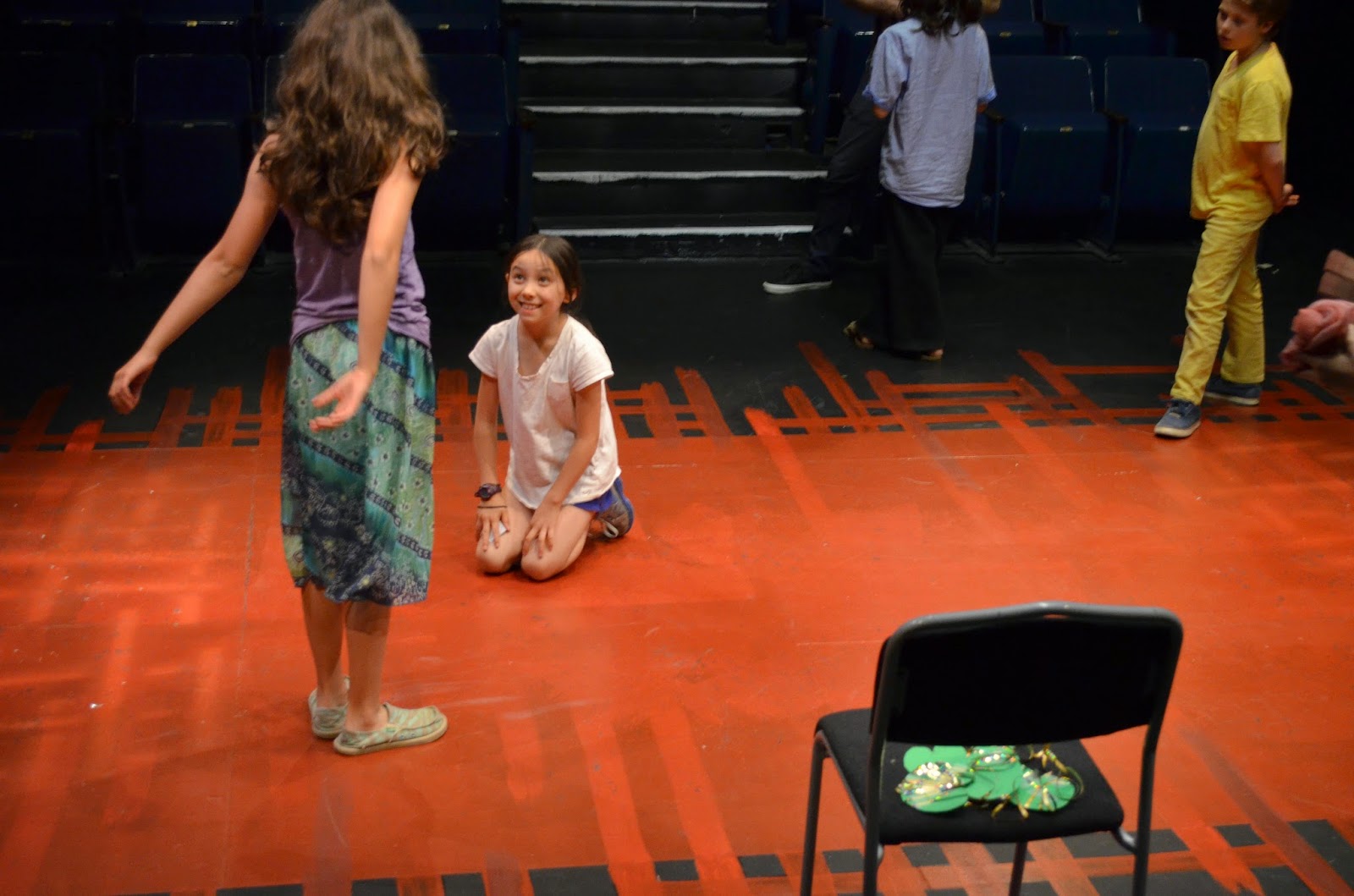 Posted by cara cunningham at 3:54 PM No comments:

Some photos from GRUESOME PLAYGROUND INJURIES, closing this weekend!  This is your last chance to see this season's apprentices on stage. 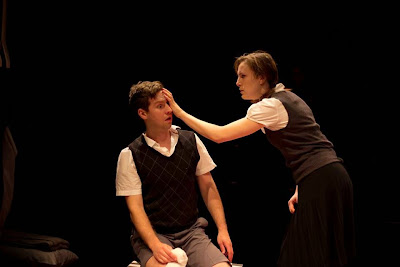 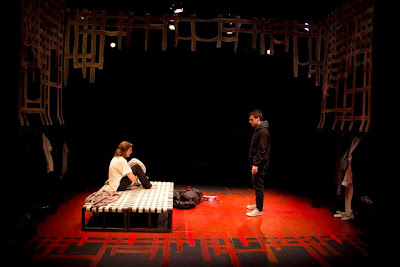 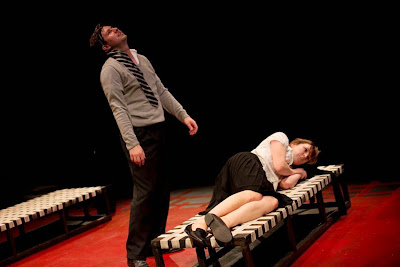 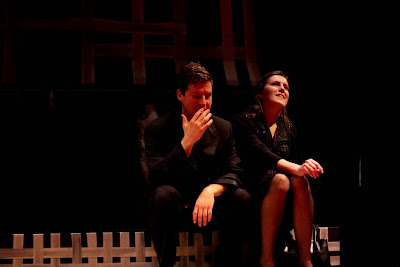 Posted by Andrea Loewen at 1:21 PM No comments:

As GRUESOME PLAYGROUND INJURIES is closing this weekend, we're up right away with the next show of the Playground Series: THE BLACK HOUSE AND THE BLUE SKY.  A new musical using the songs from the Stars album, The Five Ghosts, this is a pay-what-you-can, script-in-hand workshop presentation.  A rare opportunity for PT audiences to see a show in development and even give feedback! 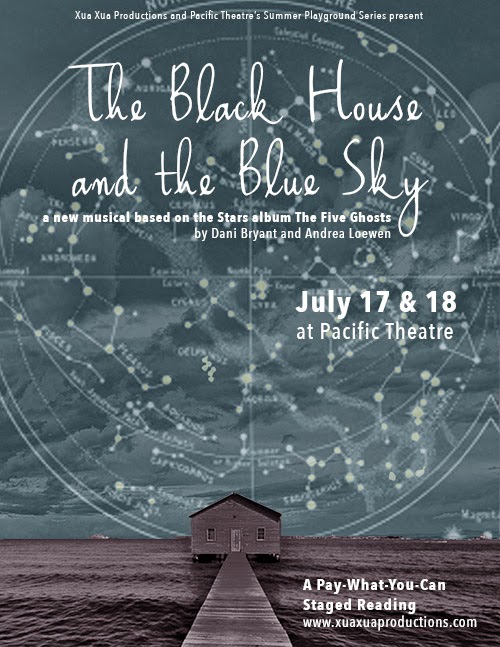 THE BLACK HOUSE AND THE BLUE SKY
by Dani Bryant and Andrea Loewen
July 17 & 18 at 8pm
Pay-what-you-can (cash at door)
Posted by Andrea Loewen at 10:18 AM No comments:

"Despite its rather morbid title, Gruesome Playground Injuries is a surprisingly tender story of love and friendship with moments of sheer brilliance."
- Mark Robins, Vancouver Presents

"Newcomers Pippa Johnstone (Kayleen) and Kenton Klassen (Doug) are both talents to watch. Klassen finds a whole lot of charm in Doug’s goofy hyperactivity... Klassen impresses. And Johnstone is so thoroughly grounded and subtly responsive that I kept imagining what it would be like to watch her on film."
- Colin Thomas, The Georgia Straight 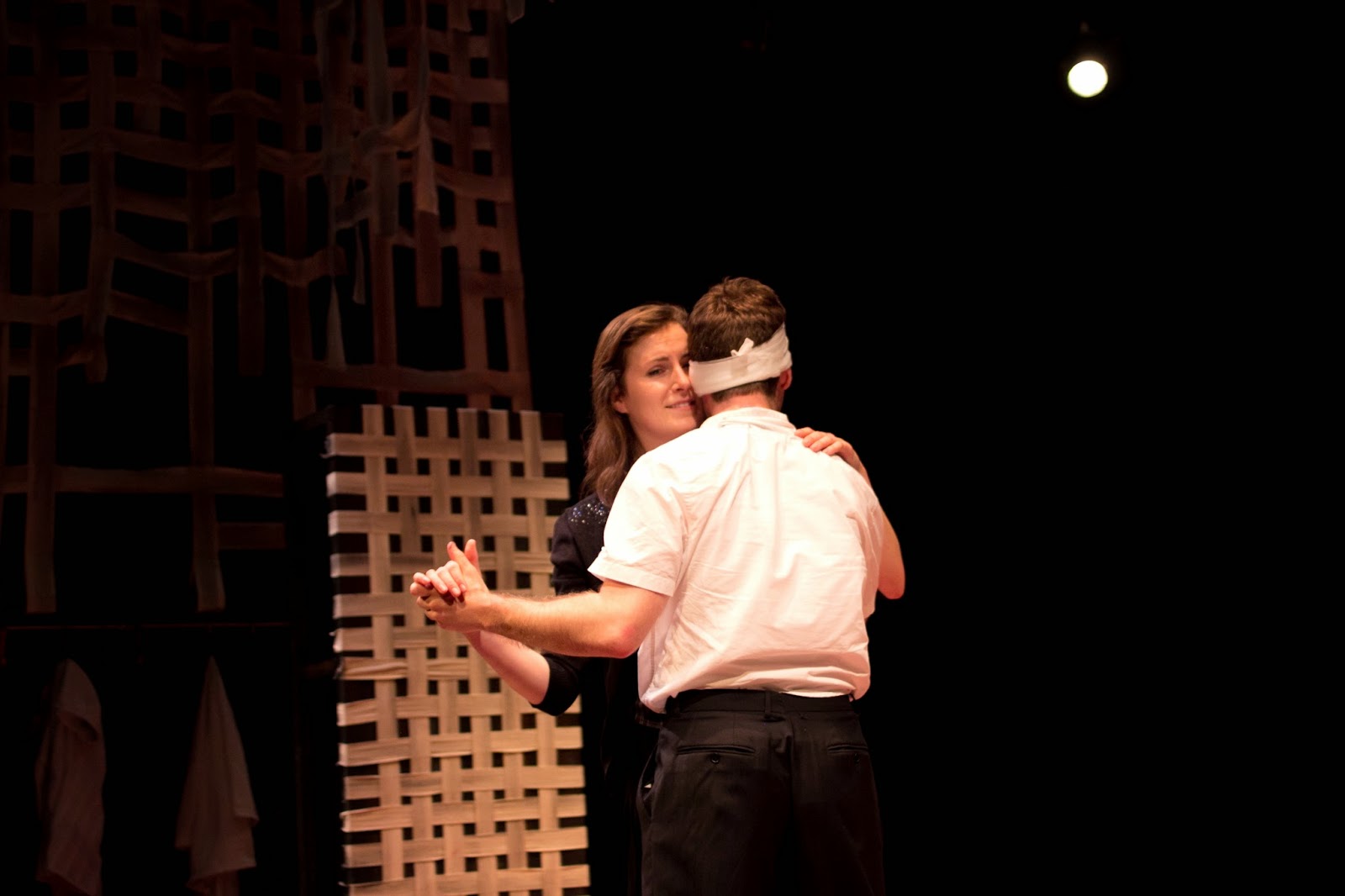 "Johnstone and Klassen yielded stellar performances...It may be difficult to shift through the eight disjointed scenes in the play, however director Chelsea Haberlin achieves this effortlessly by using the actors’ onstage costume changes to predicate the transitions. Garments designed by Christopher David Gauthier dangle on racks at opposite sides of Carolyn Rapanos’ bandage draped, alley-style stage.
- Cora Li, Vancouverscape

"Kenton Klassen finds joy and humour in his portrayal of accident-prone Doug. Pippa Johnstone brings a grounded solemnness to her role of Kayleen, a woman who finds herself going to extremes in her life in order to feel something."
- Megan Gray, Vancity Buzz 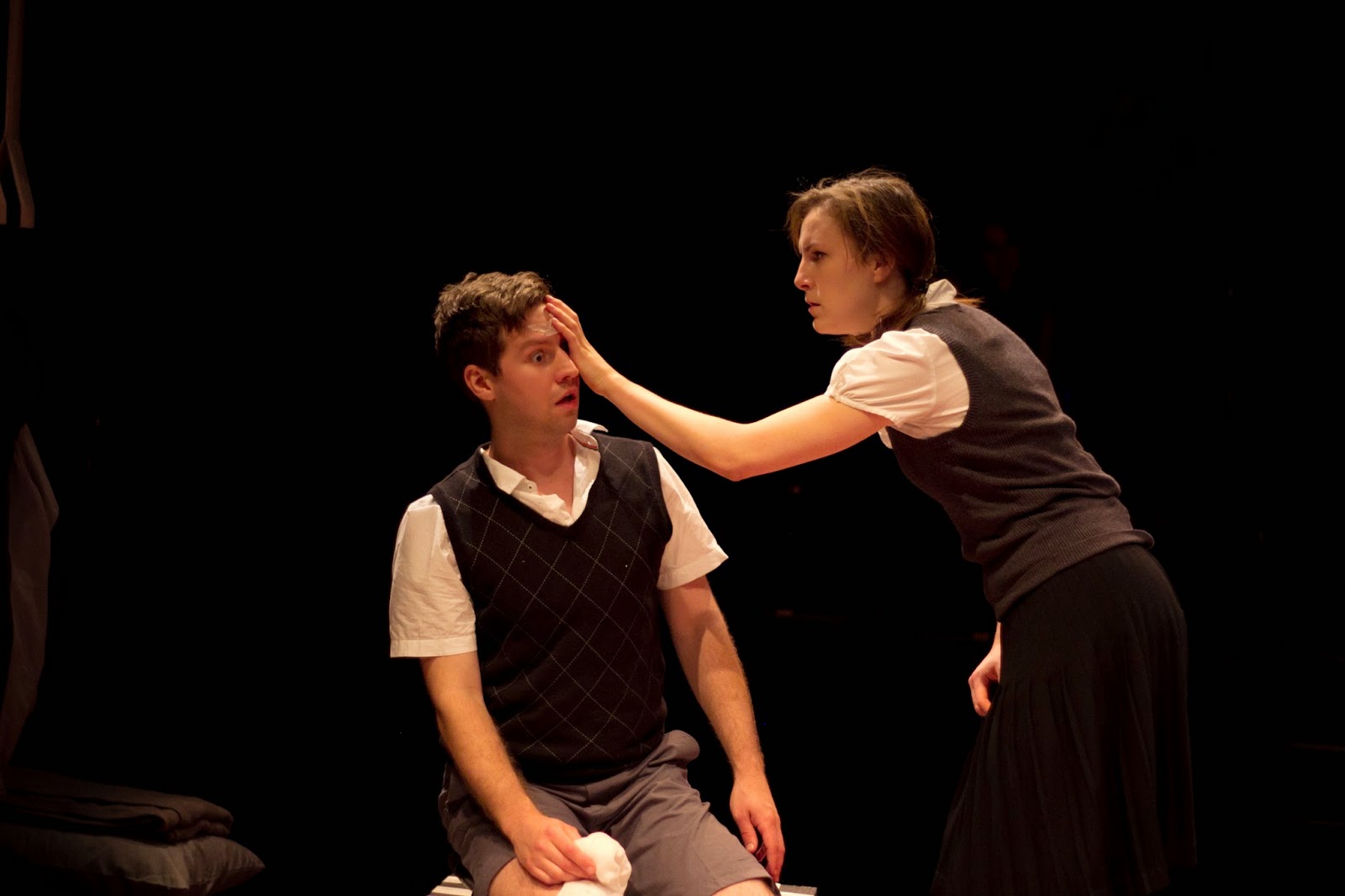 "Both actors are quite remarkable, Mr. Klassen is bighearted with the goofy grin eager to show his wounds and saying things like 'I think kissing is going to be really nice'. He also really captures the different ages they have to play, each time we meet Doug, his life experiences have changed him. As Kayleen Ms. Johnstone is more quiet in her approach. Her character is much darker with more secrets, and watching the debate about what to say and what not to say in her eyes is mesmerizing. Ms. Haberlin's direction is tender and playful."
- David C. Jones, Out TV 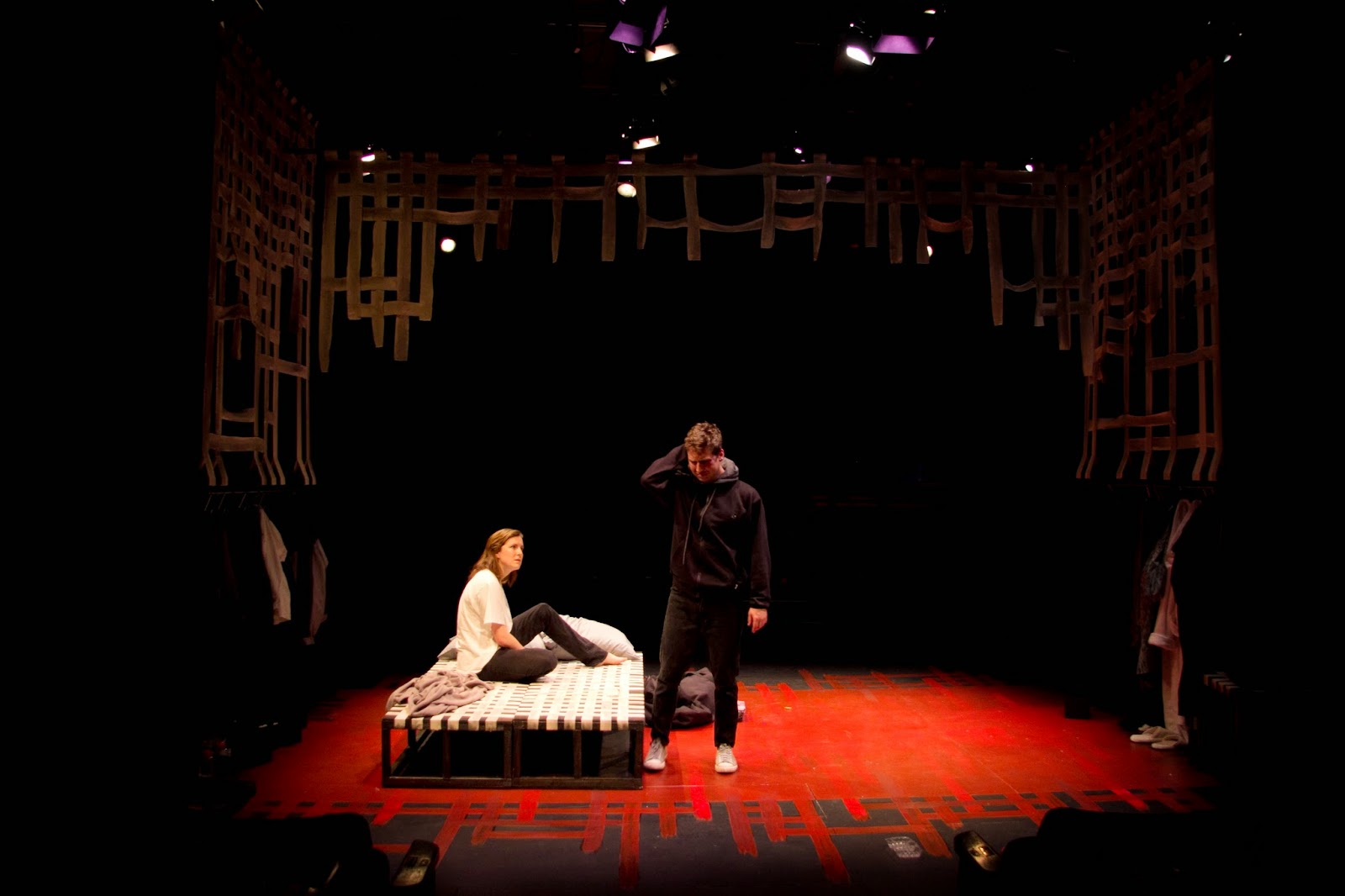 "Just saw this tonight. Compelling show! See it if you are able."
-Jim May, Audience Member

"Good on ya Gang! I really enjoyed the show last night. All the best with this crazy little love story!!"
-Robert Salvador, Actor

The Soul Food arts event of the summer, I'd say. Makoto Fujimura is a celebrated visual artist who has become a voice worth listening to in the conversation about art and faith. I'm going. Oh, and Sheree Plett and Jeremy Eisenhauer, who flew the coop to live in the interior a couple months ago, will be playing - can't miss that! 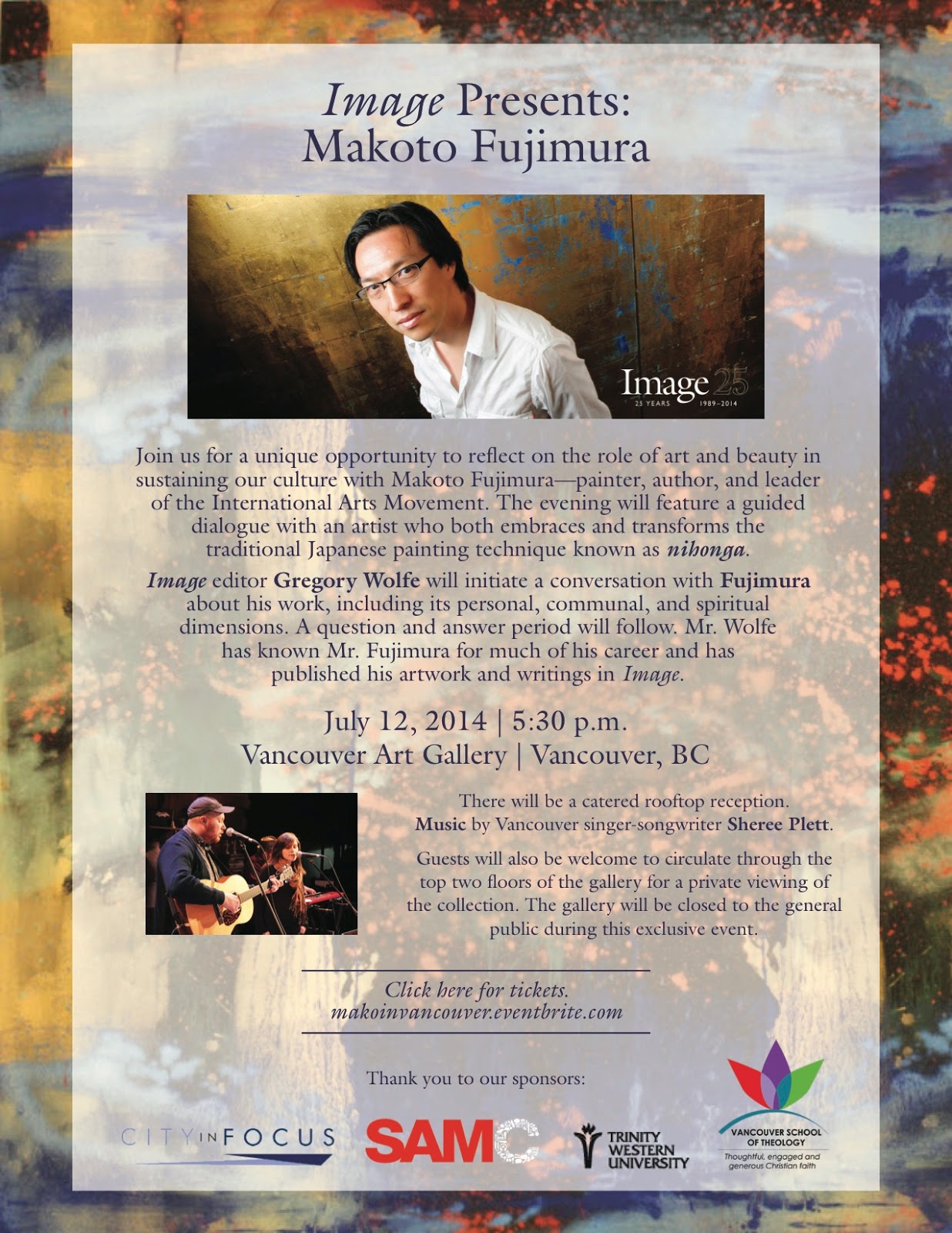 tickets
Posted by Ron Reed at 11:29 AM No comments:

Kerri Norris will be leading both our Kids and Teens Camps this year! We decided to ask her a few summer-themed questions! 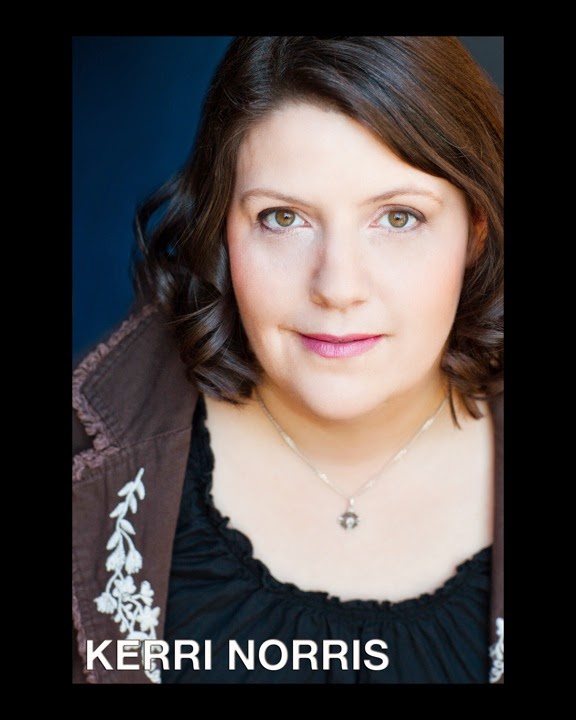 Did you go to summer camp?
I went to Guide camp a few times but mostly we spent our summers at the local paddling pool where there were University students who did crafts, played games and organized activities with us.

What is your favorite part about summer?
I enjoy camping and rehearsing our summer show in the park.

What is your favorite Theatre game?
I really like playing Teacher even though it is really difficult to do properly. I enjoy watching everyone trying to come up with the excuses then try to act them out.

What’s your favorite movie?
I like a lot of different kinds of movies. I always watch "Meet Me in St. Louis" when it comes on.

If you could be a kid again for one day, how would you spend your day?
Riding my bike and meeting my friends to make up games at our tree fort. Going where the wind took us and making up our own games. That was the best.