mother of the maid | playwright interview 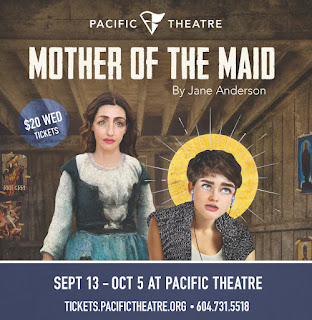 The start of a new season is always an exciting time in the life of a theatre. The green room is filled with the excited buzz of actors and stage management as they launch themselves into rehearsals, greeting old friends, and making new connections. In the office, phones are starting to ring with patrons booking their tickets. And we have a feeling that word of mouth is going to make our opening play of the season a big seller.

Mother of the Maid is by Jane Anderson, and was originally produced on Broadway starring Glenn Close. And while we can't boast that we have Glenn Close in our production, we are presenting the Canadian premiere of the play. And the title role will be played by Pacific Theatre favourite, Anita Wittenberg (Holy Mo, Agnes of God, Mourning Dove).

Jane Anderson was also coincidentally the screenwriter for The Wife, which garnered Close an Oscar nomination. She was interviewed for Vanity Fair last year and we wanted to whet your appetite for Mother of the Maid by sharing an extract with you here. 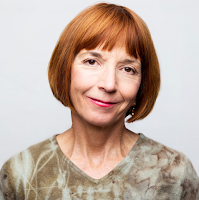 Pay close attention to the women Jane Anderson writes: beneath their modesty and reticence wait layers of steel, ready to be unsheathed.
In Mother of the Maid, Glenn Close plays Joan of Arc’s pious mom; in The Wife, she portrays a Nobel Prize winner’s staunch spouse. Both protagonists—ordinary women tethered to extraordinary beings—question the faith and husbands that moor them and emerge, as Anderson’s scripts unravel, their own autonomous beings. Anderson uniquely positions her narratives from the perspective of those who’d usually be considered secondary characters, and her women astound—even when sharing scenes with fiery crusaders and celebrated literati.
“These women, for me, are more exciting to write and explore than the heroic leads who have been written and explored to death,” Anderson said. “I find the women or mother roles to be affected by the hero’s actions on such a profound level, an even deeper human level than what the heroes experience.”
These under-explored characters compel Anderson to write—as do intimate attachments to the source material.
“Mother of the Maid is a deeply personal play for me,” she said. “I had a Joan of Arc obsession when I was a young gay girl trying to come out to my mom. I think women of my ilk had that with Joan blasting apart traditional male/female roles. Then when I became a mother, I realized how it must’ve been to raise a child like me. Now that I am older, I have a deeper understanding of what it is to raise an unusual child, and how painful and exciting it is.”
Anderson’s dual perspectives allow her dialogue to crackle as ideas clash and characters’ long-buried scars volcanically surface. Her early years as a performer also helped her craft “actable scenes,” which clearly helped build a relationship with Close.
“I’m always looking for characters that are challenging, that call for an exploration into new psychological and emotional territory,” Close said. “Both Joan Castleman, in The Wife, and Isabelle Arc, in Mother of the Maid, enticed me with that kind of challenge. They demand craft, truth, and empathy and are woven into stories that are provocative and emotionally impactful. Her writing and her generous, passionate collaboration makes me a better actress.”

The full interview can be found by clicking  here.
Posted by Ian at 5:26 PM No comments: