smoke on the mountain | the sanders family gospel sing

Look at this amazing poster Carolyn Rapanos designed for the Sanders Family Singers' North Carolina Tour in SMOKE ON THE MOUNTAIN! 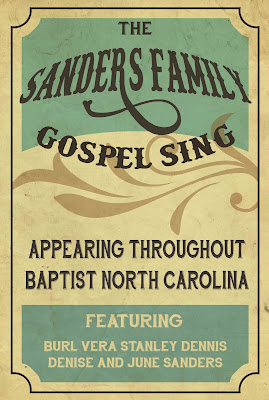 Posted by Andrea Loewen at 10:02 AM No comments:

smoke on the mountain | advance photos

Check out the promo shots of the Sanders Family Singers for SMOKE ON THE MOUNTAIN, provided by the good folks of the Midnight Theatre Collective. 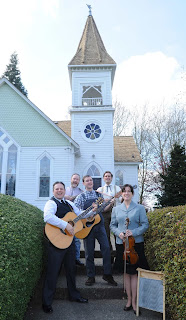 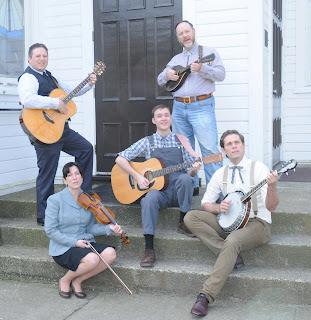 Posted by Andrea Loewen at 9:57 AM No comments:

Email ThisBlogThis!Share to TwitterShare to FacebookShare to Pinterest
Labels: Pacific Theatre, Photos, Smoke on the Mountain

smoke on the mountain | the costumes

Here's a look at the inspirations that went into the costume designs for SMOKE ON THE MOUNTAIN. 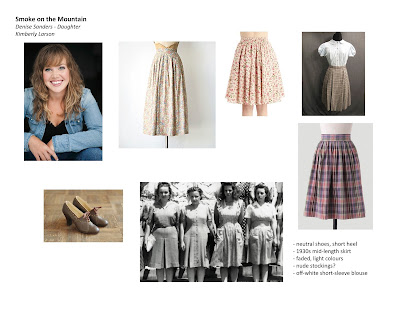 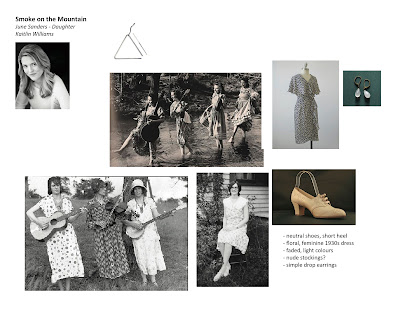 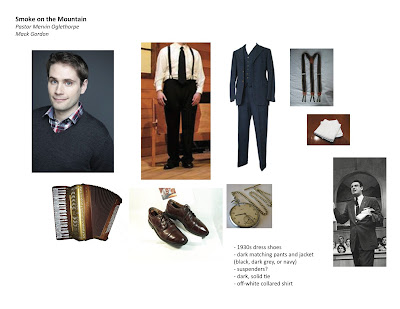 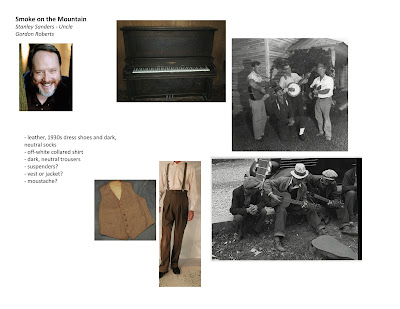 Posted by Andrea Loewen at 10:05 AM No comments:

Sarah Rodgers is one of our favourite directors to work with.  Her imagination and creative drive makes each show incredibly unique.  Here's a Throwback Thursday retrospective on some of her past productions with us.

Posted by Andrea Loewen at 10:02 AM No comments:

smoke on the mountain | the set

Set Designer Carolyn Rapanos has been hard at work on the world of SMOKE ON THE MOUNTAIN.  Check out some photos below of the set maquette (still in progress - she says she's made some changes since taking the photo), and a sketch of her original concept for the set. 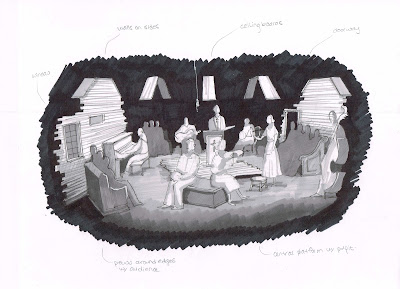 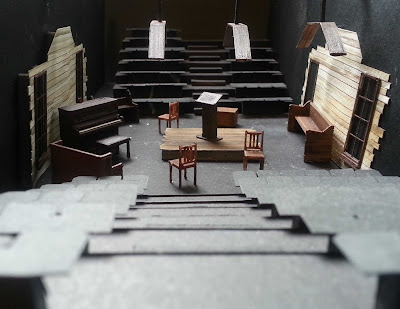 Posted by Andrea Loewen at 10:00 AM No comments:

smoke on the mountain | introducing the creative team

The Midnight Theatre Collective has assembled an incredible creative team for SMOKE ON THE MOUNTAIN! 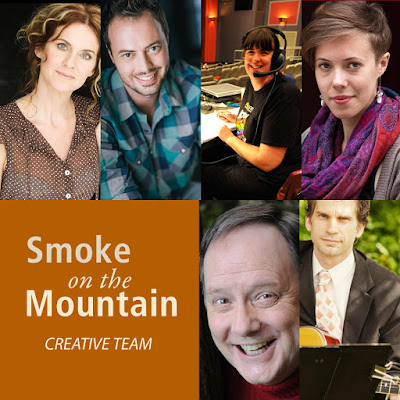 If you've been around PT (or the Vancouver theatre scene) much, you've probably seen a Sarah Rodgers show!  Just in the past few years, Sarah directed IT'S A WONDERFUL LIFE RADIO SHOW, ESPRESSO, A CHRISTMAS CAROL, GODSPELL, and DRIVING MISS DAISY.

This is Ian's first time working on a show in our season, and we couldn't be more excited to have him!

It's always a treat to have Melanie stage manage - she joined us for UNDERNEATH THE LINTEL last year, and worked with The Midnight Theatre Collective last time they were here with THE SPITFIRE GRILL.

Carolyn started working her way into the Pacific Theatre circle last year by running props for THE RAINMAKER and designing the majestic set for FREUD'S LAST SESSION.  She'll also be doing set and costumes for THE AMISH PROJECT, up next!

Stephen Bulat has been floating around our world for quite some time - he worked with The Midnight Theatre Collective last time around in THE SPITFIRE GRILL, and designed for CHRISTMAS ON THE AIR and MASTER HAROLD... AND THE BOYS.

Gordon is a mainstay of The Midnight Theatre Collective, last performing in THE SPITFIRE GRILL, he'll be performing and musical directing this time around!
Posted by Andrea Loewen at 10:00 AM No comments:

Jake's Gift (born at Pacific Theatre in 2002) is coming to Vancouver again for one night only! Last seen at PT in our 2010/2011 season, this is a great chance to see Julia Mackey's award-wining show, directed and stage managed by Dirk Van Stralen, who has also graced the PT stage in CARIBOO MAGI and THE WOODSMAN! 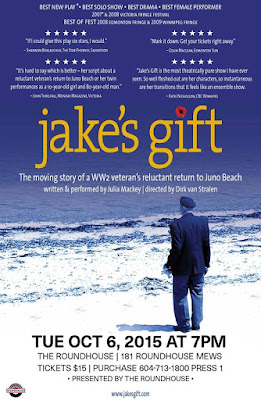 Jake's Gift is a surprisingly funny multi award winning drama about a WW2 veteran's reluctant return to Juno Beach to find the grave of the brother who never came home. While wandering the shores of Juno Beach, Jake encounters Isabelle, a precocious 10-year-old from the local village. Her inquisitive nature and charm challenge the old soldier to confront some long ignored ghosts. Most notably, the war-time death of his eldest brother, a once promising young musician.At its heart, Jake's Gift is about the legacy of remembrance and makes personal the story behind one soldier's grave.

**Jake's Gift is not recommended for children under 10.

www.jakesgift.com
Posted by Unknown at 9:00 AM No comments:

throwback thursday | pt at the fringe 2010

The last time we hosted shows in the Vancouver Fringe Festival was 2010 - here's a throwback to those productions!

smoke on the mountain | the cast

The Midnight Theatre Collective has gathered an incredibly talented group to perform in SMOKE ON THE MOUNTAIN!  Here's a brief introduction to the cast. 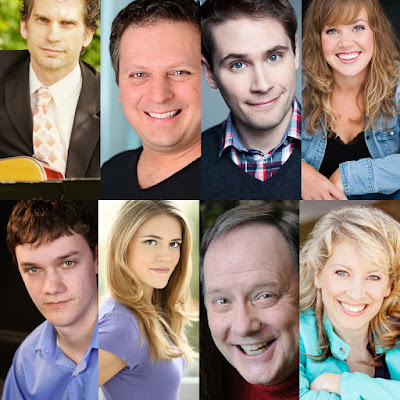 Stephen Bulat is a part of the ensemble supporting the Sanders Family Singers with music as well as designing the lights and sound!  He has last been involved in Midnight Theatre Collective productions.

Damon Calderwood is a familiar face on the PT stage.  He last performed in The Midnight Theatre Collective's THE SPITFIRE GRILL, and also often steps in to do our production photography.

Mack Gordon last performed at Pacific Theatre in THE FOREIGNER and THE LION, THE WITCH, AND THE WARDROBE.  He is also a member of our Working With playwright development group.

Kim Larson is one of this year's season apprentices!  A talented singer and actor, we are excited to have her on board all season long, and kicking off her apprenticeship with this fun show.

Matthew Simmons is quickly becoming a Pacific Theatre staple.  He performed in last year's SIDESHOW performances as well as IT'S A WONDERFUL LIFE RADIO SHOW.  This year we will be seeing him again in A CHRISTMAS CAROL: ON THE AIR.

Kaitlin Williams is a former apprentice who has since performed in DOUBT, THE LION, THE WITCH, AND THE WARDROBE, and THE FOREIGNER.  Every time she visits our stage is a treat!

Gordon Roberts is a mainstay of the Midnight Theatre Collective.  Last time you saw him here was in THE SPITFIRE GRILL.

Lalainia Lindbjerg Strelau performs in musical theatre all over town (now returning from a brief hiatus to raise her children).  Her last performance at Pacific Theatre was in CHRISTMAS ON THE AIR.
Posted by Andrea Loewen at 1:43 PM No comments:

Pacific Theatre has a LOT of plays in development. Here's one we commissioned from New York playwright Chris Cragin-Day and Nashville songwriter Don Chaffer, after seeing their collaboration on Son Of A Gun Off-Broadway a couple years ago. Hopefully it'll be on the PT stage before too long! (Just to be clear, the staged reading is in New York.) 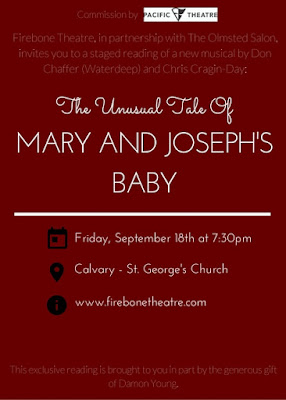 It's no secret that we couldn't do our work without our donors, but in this year's donor report, Ron makes it clear what that actually means: not only are we able to create theatre at all, but the loyal support of our donors is what allows us to do the kind of work we do.  Because of you we are able to take risks and explore stories and artists who might take us to unexpected places.  Below is our donor report from the past year, with details of a few of the things we were able to do with your donations, as well as where we're planning on going.  Thank you!

View or download as a PDF here.
Posted by Andrea Loewen at 2:19 PM No comments:

around the world in 80 days | gallery 7 theatre audition

Our friends at Gallery 7 Theatre are holding open auditions for their upcoming production of AROUND THE WORLD IN 80 DAYS! For more information visit their website.

"We are looking for male and female performers aged 18 - 75 to perform in our production of Around the World in 80 Day, adapted by Mark Brown from the Jules Vern novel. Those interested in helping out behind the scenes are also invited to attend the audition."

Please Register Ahead of Time
Call 604-504-5940 or email info@gallery7theatre.com


When you register, please include your name, phone number, email address and a little bit about your theatre experience, if any. Please read the Actor's Orientation Package (available here) prior to registering for the audition.
Posted by Unknown at 11:38 PM No comments: