Garth Bowen is a long-time friend, and a long-time friend of Pacific Theatre.  He was in our first production of Cotton Patch Gospel at the Richmond Gateway Theatre in October 1989, and has played nearly twenty years worth of Christmas Presences.  He posted a video of this brand new song on Sunday, March 29, on his Facebook page.

Social distance, seems so strange
I’ve got my dear ones on my brain
How long like this, maybe a year
How can I guard my heart from fear?

There’s a dozen notes upon my wall
From friends who live in protocol
warmest thoughts and funny shares
sent with love and heartfelt prayers
Posted by Ron Reed at 1:16 PM No comments:

'no show tonight' | behind the scenes at pacific theatre: coronavirus edition! 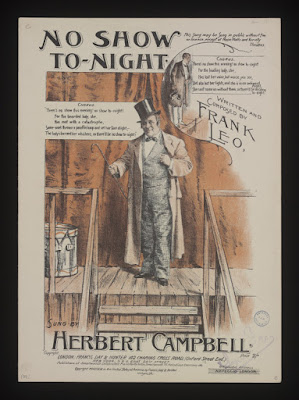 One of my favourite PT audience members sent me a thoughtful, inquisitive email, and I think our correspondence may be something worth sharing with other folks who may have questions about the practical challenges theatres and theatre artists are facing right now.

THINKING ABOUT HOW AND WHERE I WILL MAKE DONATIONS AT THIS TIME. PLEASE TELL ME:
ARE YOU OBLIGATED TO PAY THE ACTORS FOR THE FULL RUN OF BEST OF ENEMIES?

We are. Plus the stage manager, and a few remaining costs - settling up play royalties, truck rental to return set pieces and props, that’s mostly it.

WHAT ABOUT, SAY, THE ARTS CLUB 'DA KINK IN MA HAIR' WHICH WAS SUPPOSED TO GO INTO REHEARSALS LATER THIS WEEK?

If they signed the contracts with their Equity actors before first rehearsal, they will have to pay a certain amount of the actors’ and stage manager’s salaries, I think maybe two weeks’ worth? But it’s common practice to sign those contracts on first day of rehearsal, so the Arts Club may have no legal, contractual obligation there. But for whatever loss of expected revenue the artists themselves will now face, they will just have to hope that the financial compensation the government is putting in place for self-employed workers will apply to freelance artists.

The artists collective who were putting together our next production, Love/Sick, will actually break even on what they’ve already had to spend on front-end costs to mount their show - IF most of the people who bought advance tickets turn their ticket purchases into donations, which PT will of course pass along to those artists. We’re still proceeding to move toward our mid-May production of Trip To Bountiful, and even if we end up having eventually to cancel it, we will pay the designers proportionately for the work they will have done by the time we cancel; the set designer has done much of her work, I’m meeting (remotely) with the music/sound designer and the costumer today, and that will mean we’ll be committing to pay at least a portion of their contracts regardless of what happens. We’ll keep moving resolutely toward that production, and incurring whatever costs are involved, until we reach the point where it’s evident the show cannot go on - in the hopes that we find a way, that the community finds a way, for shows to go on. And if we can’t produce Trip To Bountiful this spring, we’ll put it in next season, so that the actors who’ve already invested time in learning their lines won’t have wasted that work - and because I’m dead set on producing that show! And we have already guaranteed the Love/Sick artists that we WILL present their show as soon as the doors are open again.

As for the Pacific Theatre artists who were touring Kim’s Convenience - which may have the dubious distinction of being the first show in BC that had performances cancelled? - I’m not sure what their Arts Club contract involves. They may be guaranteed pay right through to the end of the run, even though it’s not going ahead, or they may only have been paid for a week or two of their remaining run. I need to look into that.

It may be that larger theatres like The Arts Club have cancellation insurance. I really hope they do, for their sake as well as the sake of the artists. But Pacific Theatre doesn’t, and I’d be surprised if other smaller, indie theatres will have that protection in place.

I'M WORKING ON A NOVEL WAY TO ENCOURAGE PEOPLE TO DONATE, AND THEN HAVE TO FIGURE OUT HOW TO BROADCAST THE "CHALLENGE".

You are the best! Truly, the people in Pacific Theatre’s audience astonish me, time and time again.

Here's a link to the Pacific Theatre website, for anyone who wants to make an online donation.
Posted by Ron Reed at 8:21 AM No comments: 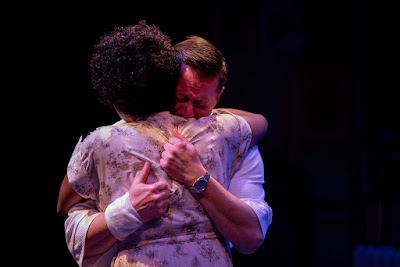 Dear PT family,
In light of rapidly developing measures to limit the impact of the Coronavirus in our community, Pacific Theatre has made the difficult decision to cancel the remaining performances of Best Of Enemies, which had been scheduled to close March 21. While authorities have not mandated the closing of venues under 250 seats, their recommendations for social distancing would be difficult to guarantee in our theatre space, which is known and valued for its intimacy.
Ticket holders for cancelled performances will be contacted directly by our staff to make arrangements, offering a variety of options with regard to their tickets. We ask that ticket holders please DO NOT call the Box Office regarding your tickets until you hear from us, in order for our small staff to handle the complexities of the situation as smoothly as possible. You are welcome to e-mail tickets@pacifictheatre.org with broader ticketing questions, and we will respond as quickly as we can.
Though we believe this decision by our Board of Directors reflects the company's values of serving our community with artistic, relational, spiritual, and financial integrity, it was a difficult one, involving both concern for public well-being and regret at the loss of such a substantial and significant piece of theatre. It has been a high water mark in our season, and we recognize the disappointment this abrupt closure will cause for those who have not yet seen the play, and for the artists who have invested such heart and passion into the work. But we respect the proactive stance being taken in our province to address the much more dire potential threat to the health of our community, and wish to play a role in that initiative.
We strive to care for Pacific Theatre staff and artists with the same intention we direct towards our patrons and our neighbours. Though ticket revenues will be significantly impacted by this decision, Pacific Theatre has committed to paying our Best Of Enemies artists for the duration of their contract.
While this closure is right for the health of our community, it creates profound financial hardship, not only for non-profit arts organizations which operate on very narrow margins, but also for individual artists whose employment may be compromised in coming days. We will need your help. If it is within your means, please consider making a financial contribution to help sustain our people and avoid lay-offs in this uncertain time.
Ron Reed & Ian Farthing
Artistic Director & Executive Director
Pacific Theatre
Posted by Julia at 2:04 PM No comments:

Email ThisBlogThis!Share to TwitterShare to FacebookShare to Pinterest
Labels: 2019-20 Season, Best of Enemies

Allen Desnoyers founded Pacific Theatre with me back in 1984, he plays pretty much every year at Christmas Presence, and he'll be back on our mainstage next season!  Meanwhile, here's a chance to see Allen's work as a playwright, composer, and performer, this Saturday in Tsawwassen. 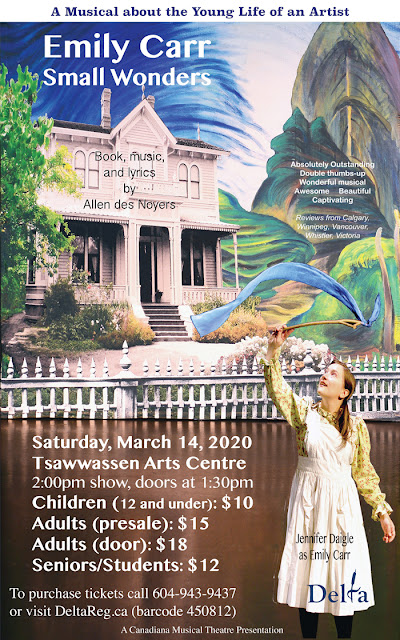 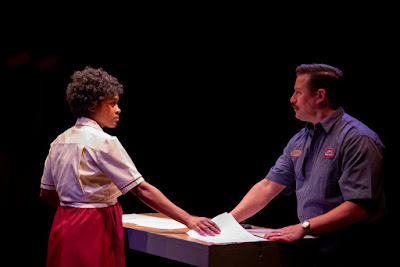 All we can say is wow! We saw Best of Enemies last night and we were blown away by how great it was.  Everyone and everything was fantastic. Such a powerful story, too. ...  We are so grateful that PT staged this excellent play. Each of the actors was just marvellous. We still rave about Robert Salvador in “Jesus Hopped the A Train”—one of the most amazing productions in PT history in our humble opinion— he was just incredible in this, too. Celia perfectly captured the spirit of the strong African-American matriarchs that we have known who hold their communities together and fight for their children, yet display amazing tenderness, too. The final scene was wonderful beyond words. Anthony was completely believable as Riddick, and his interactions with both of the main characters were stellar. And Rebecca did such a beautiful job with Mary—understated in all the best ways which highlighted both her strength and her vulnerability.
I apologize for this long email, but we have spent a lot of time thinking about the show and talking about it since we saw it last night, and I wanted to thank all of you all. We truly need more stories like this. It reminds me of what Golda Meir said in a different fraught situation: Peace will come to the Middle East when the Arabs love their children more than they hate us. Thank you for producing this wonderfully hopeful, yet realistic play about a true story of redemption."
audience member

“The elements that really make Best of Enemies worth seeing are the relevance of the play’s themes and the excellence of the acting. Under Ian Farthing’s direction, this Pacific Theatre production is excellent. Informed by a deep — often furious —  undertow, Celia Aloma’s performance as Atwater is always wary, always listening.  As Ellis, Robert Salvador manages to humanize the racist without apologizing for him. Playing the Department of Education employee who brings Atwater and Ellis together, Anthony Santiago delivers a sophisticated portrait that combines wit and compassion. And Rebecca deBoer will make you feel the exhaustion — and fight — of Ellis’s wryly funny wife Mary.” Colin Thomas

“Do yourself a favour and see this slow burn to brilliance, with stunning performances. Deftly directed by Ian Farthing.” audience member

“Feels like a balm for our times right now. Really hoping it gets the buzz it deserves. A beautiful show.” audience member

“There are moments in this production where you know everyone in the audience is holding their breath.” Monika Forberger, Entertainment Vancouver
“Exceptional in all respects…powerful performances, great overall design, brilliant direction. Loved it!” audience member

“Ann (Celia Aloma) takes out her frustrations on white racists like Ellis with a quick tongue and wicked sense of humour […] Rob Salvador gives a marvellous performance as C.P. Ellis.” Jerry Wasserman, Vancouver Sun
“Aloma and Salvador have great on-stage chemistry, and their flawless southern accents will truly transport you to North Carolina, circa 1971.” Erin Jane, Review Vancouver
Posted by Julia at 11:10 AM No comments: