A couple years back, my friend Rudi played me his new cd. I bought it from him on the spot, and it became my favourite cd of the year. By then, Miriam had already moved to England, so I never met her or heard her play live. But I sent her some fan mail, and when it turned out she'll be here for a visit in June, we offered her Pacific Theatre for a concert. Along with Peter La Grand, a fantastic Vancouver musician who opened for Over The Rhine here a while back: we've heard his music on the PT stage, but this is the first time he'll be singing it for us. Promises to be quite the night! 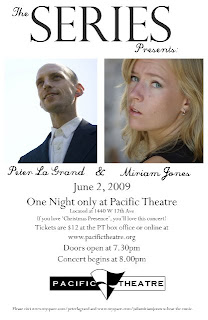 Pacific Theatre welcomes you to The Series: A concert series dedicated to PT's extended family of amazing musicians. We wanted to give those who support us at events like Christmas Presence their own place to call home.

Inaugural concert featuring two of the West Coasts brightest rising stars, Miriam Jones and Peter La Grand in the living room intimacy of Pacific Theatre. Join us for an unforgettable night of music.

Tickets only $12! Purchase online or at the door.

"Being Here is a fun, sometimes poignant, and entirely enjoyable effort from one of the West Coast's rising young artists."
- North By Northwest, CBC Radio One
Posted by Ron Reed at 12:10 PM