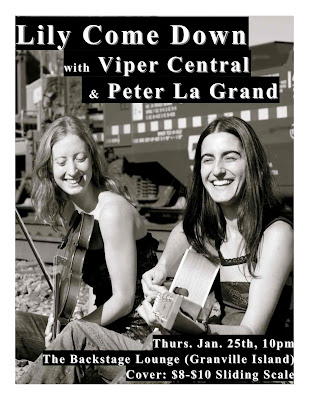 If that girl on the right looks familiar, maybe it's because you saw her at CONFESSIONS last fall, that's Kathleen Nisbet. (At least, I think it's Kathleen. Only, how come that other girl's got her fiddle?....)

Anyhow, she's making music tonight at the Granville Island Backstage Lounge. And so is Peter La Grand, who opened for Over The Rhine at Regent last fall. And Kenton Wiens, drummer for almost every PT show with music in the past two or three seasons, plays with Lily! Many birds, one stone.

Here's what the email said;

Lily Come Down... AND Viper Central?... AND Peter La Grand?

That's right folks - this night's a night to remember. It's a Thursday and it's a late show - not for weak constitutions.

When: Thursday January 25th, 10 pm
Where: The Backstage Lounge, Granville Island
Who: see above
What: Awersomeness...
Why: N/A
How: I'll leave that in your capable hands.