frankenstein | reflections from an audience member

A substantial piece of writing about our current show. The author, who prefers to remain anonymous, attended the preview performance and sent us this marvellous, insightful response. FRANKENSTEIN: LOST IN DARKNESS runs to Nov 2. Information and tickets at our website. 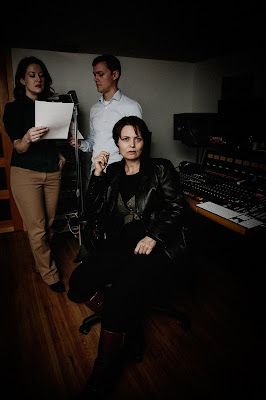 Mary Shelley famously wrote that she wanted her story of Frankenstein “to speak to the mysterious fears of our nature and awaken thrilling horror … to make the reader dread to look around, to curdle the blood, and quicken the beatings of the heart.” From the front row in last night’s performance of Frankenstein: Lost in Darkness, I did indeed feel my blood curdling and my heartbeat quickening several times during the show. Earlier, I wasn’t sure how effective a live “immersive audio drama” would be at expressing the disquieting undercurrents of a 200 year-old Gothic saga. As the four actors went through their pre-show warm-up arranging scripts on stands, prepping Foley devices, moving around in street clothes through a tangle of mic stands and cables, it was hard to imagine there’d be much magic. Yet within the first few minutes, I was fully immersed in the spell. An unnerving creepiness led me away to be lost in the darkness.

There is so much to admire in this production. The acting was raw, intense, and engaging. Tariq Leslie’s otherworldly bird calls and monstrous utterings were desperate cries from the underworld. Corina Akeson’s heart-wrenching dialogue embodied the anguish we all feel at confronting the limits and consequences of our darkest imaginings. There was added power in seeing the actors unadorned by costumes or make-up, strangely revealing the artifice of an audio drama. Scoured of convincing illusions, the naked sets, props, and equipment never let the audience slip into the comfort of unawareness. At some subterranean level, the alienation created by the visible contrivances embodied the spirit of a creator grappling with the created.

At times, I closed my eyes to experience the acoustical dimension of the play on its own. While this certainly worked and enhanced the effect of words, effects, and sound design, each time I opened my eyes again I was even more impressed to witness how the soundscape was being created. Seeing wooden implements voicing insect chirps, scrunched tin foil crackling like flames, and Diana Squires spiriting ghostly moans into a microphone didn’t shatter the acoustical magic. Rather, it enhanced the alienation effect: this is how we all simultaneously create and experience our own imagination - in dream, fantasies, or murky delusions.

The music and sound design were exceptionally effective and seductive. When the actors are just metres away – wearing tired bluejeans, reaching for audio props, sending spittle flying with exuberant projection – you’re quite aware of how the visual magic is working on you. But the audio effects operate in another dimension. They sneak in through the back door and grab you viscerally. Swooping aural atmospheres roiling like dark clouds; chilling disembodied digital effects that blindside you without any connection to wooden spoons or a vintage spinning wind machine. Again, the ingenious contrivances worked to place me in Victor Frankenstein’s soul, confronting powerful forces beyond our control. If an audience can be transported this effectively with sound, why would anyone bother capturing the story through a lens?

I wasn’t sure how I might respond to Victor being portrayed by a woman. Transposing a classical character’s gender, race, or traditional traits doesn’t always work. Yet with Corina Akeson’s first words I immediately understood why she was perfect for the role. Just as the story first came to Mary Shelley in a dream after taking part in a ghost storytelling contest improvised by Percy Shelley, Lord Byron, and other poets and partners, the drama is at its core a female narrative about a male’s dark imaginings. What better way to personify Mary Shelley’s inner Victor than for a powerful woman to tell his tale? Shelley’s demonic yet pitiable monster portrays the haunted distortion of the motherless son. Just as Frankenstein resonated with the transition from the Romantic era to the age of industrial technology, today the story also reverberates disturbingly with the incel phenomenon: repression and anger still conjure up destructive monsters armed with self-justification.

One final thought about the staging of the play. The production obviously reveals a fascination with sound. Rarely have I seen such careful attention to the acoustical nature of a stage show. Although the audio mix was rich and varied, I found myself wondering what it might be like to hear the production as though it were an actual radio show: no lights, no props, just pure sound. To that end, wouldn’t it be fantastic to have the full mix of voices, Foley effects, and digital sound design all transmitted through the mixer to wireless headphones via Bluetooth? It could simply be an optional bonus for anyone with a pair of noise-cancelling BT headphones. Yet how fantastic it would be to hear all the subtleties and nuances in this sophisticated audio masterwork with the clarity, richness, and intimacy of personal stereo? Surely it would be easy to configure. And what an experience it would provide.

Thanks to the entire production team for providing such a uniquely stimulating and thought-provoking presentation. It’s rare that a night at the theatre treats you to an experience unlike anything you’ve had before. This production of Frankenstein does that with admirable artistry. I feel lucky to have had a chance to enjoy it, up close and personal. Congratulations.
Posted by Ron Reed at 12:29 PM