The moment The Kwerks appeared on the CHRISTMAS PRESENCE stage a few years ago, they instantly became regulars. A couple years back they debuted a new tune, The Drum Song, that felt like a departure from their usual Kwerky, upbeat style. And this summer they retitled the song, and created a video with another Pacific Theatre guy, Jason Goode, who directed a memorable production of DANNY AND THE DEEP BLUE SEA in 2012. Jason gave me an advance look at it, and I was so moved; more than a music video, it's essentially a brilliant short film. Several terrific performances, including Shauna Johannesen (COMMON GRACE) and Aleks Paunovic (DANNY& THE DEEP BLUE SEA).

Laura Koch (head Kwerk) writes: "We’ve been working for a long time towards the release of our song “Find Your Loud” - you might remember it titled Drum Song when we played it at Christmas Presence. Well it’s re-titled, and we worked with Jason Goode’s production company to put together a beautiful music video which we’re showing at The Clova this Friday in a celebration of the release. There will be live music (by our band, of course), popcorn, the screening, a Q&A with cast & crew, and even some fancy new quirky merch." 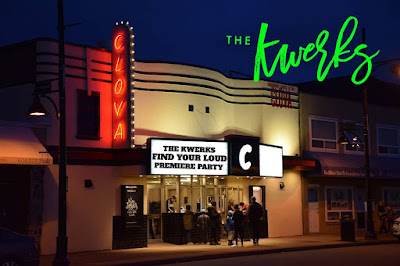 The Kwerks
FIND YOUR LOUD release party and concert