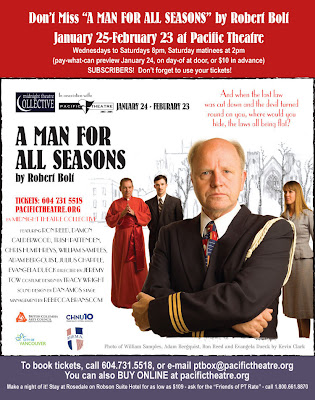 Don't Miss A MAN FOR ALL SEASONS at Pacific Theatre

Chris (C.C.) Humphreys is the best-selling author of five historical fiction novels – including one on Henry VIII’s second wife, Anne Boleyn, and an international actor seen on stages as wide-ranging as London’s West End and Hollywood’s Twentieth Century Fox. Midnight Theatre Collective and Pacific Theatre are honoured and privileged to welcome him to the cast of A Man for All Seasons, in the roles of the dread King Henry VIII and the relentless and calculating Thomas Cromwell.

When Henry VIII sets out to divorce his wife he seeks the support of Sir Thomas More – revered scholar, lawyer, and churchman - the Lord Chancellor’s quiet defiance ignites a ferocious battle as he struggles to avoid the dreadful inevitable choice, between King and conscience, loyalty, and martyrdom. A play for all time, Sir Thomas More is A Man for All Seasons. Midnight Theatre Collective’s version is set in post-World-War II era, a period steeped in suspicion, dangerous politics, and cold war.

This production of the award-winning masterpiece features Ron Reed (Shadowlands, God’s Man in Texas) in the role of Sir Thomas More and Chris Humphreys (The Rivals, Hamlet) as the formidable, unforgettable King Henry VIII. Also starring Trish Pattenden (Lettuce & Lovage), Evangela Dueck (Halo, Terrible Things), William Samples (The Birthday Party), Adam Bergquist (Last Train To Nibroc, Chickens, Portia My Love, The Odyssey), Damon Calderwood (The Elephant Man), and Julius Chapple (richardthesecond: a nightmare), and directed by Jeremy Tow (Agnes of God, A Streetcar Named Desire), Midnight Theatre Collective’s production of A Man for All Seasons is for all people whose conscience has ever stood up against the way they may be forced to live.