Quite extraordinary, really. SON OF MAN is my favourite Jesus film. It played VIFF a few years ago, and I attended both screenings, and searched for years before coming up with a DVD copy. I'm also a big fan of THE MIRACLE MAKER, which is - believe it or not - a claymation life of Christ that is anything but cheesy. Screenplay by Murray Watts, a co-founder of Riding Lights Theatre, a model for Pacific Theatre.  SON OF MAN director Mark Dornford-May is also a man of the theatre in England and South Africa, with a filmed treatment of NOYE'S FLUDDE currently in post-production. Both Watts and Dornford-May will be in attendance! with screenings of their respective Jesus movies at the Hollywood. Such a well-conceived event - standing ovation, Regent College! I'll be there. (RR) 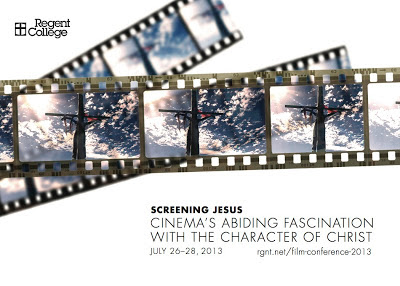 Deliberately set up as a conversation between academics and practitioners, this conference brings together leading experts on film and popular culture, filmmakers, theologians, and three intriguing films from the last thirty years. Over three days, participants will enter into this conversation, considering with the host of speakers such topics as the Jewishness of Jesus in the movies, the challenge of dramatizing Jesus for film, the interpretation of Jesus in a non-Western context, and the public controversies that have sometimes surrounded cinematic portrayals of Christ.

Are you interested in film and intrigued by film depictions of Jesus? Are you keen to discuss the social and ethical issues often raised by them? Do you desire to take a deeper look at the ways in which Jesus has been thought about and interpreted in popular culture? If you answer yes to any of these, plan to join us July 26–28.