Vancouver Presents' Mark Robins sat down with director Kaitlin Williams and Ian Butcher (playing Joan's father Jacques) to talk Jane Anderson, dealing with teenagers, and why fifteenth century France is a surprisingly funny place to be. 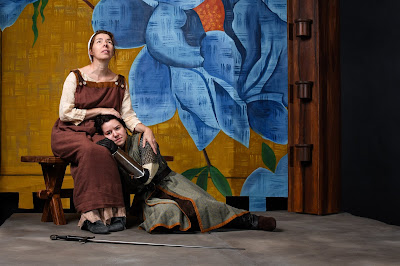 For centuries, writers have turned the story of Joan of Arc into every manner of film, television, opera, and theatrical works. Usually told from Joan’s perspective, in Mother of the Maid, playwright Jane Anderson tells her story through a different lens.

“Anderson has stuck close to history in that she’s examined the true story of the family surrounding Joan of Arc’s narrative,” says Kaitlin Williams, who directs Mother of the Maid as the season opener for Vancouver’s Pacific Theatre. “Instead of following Joan’s story, it follows her mother Isabelle and the journey she takes as the mother to this remarkable young woman.”

To illustrate, Williams points to a particular scene as Isabelle goes to court.

“The lady of the court is also a mother from a different background than Isabelle but we get to see these two mothers interact, connect, and have this moment of kinship,” she explains. “That’s at the heart of this play. It is about Joan of Arc for sure, but I think it really is about parenting. It’s about motherhood itself.”

“It is definitely a mother-daughter story, but the entire family contributes to the story of Joan, of her growing up and how it affects her family,” adds Ian Butcher, who plays Joan’s father Jacques. ...

Not the first time Butcher has been part of telling Joan of Arc’s story, having performed in Shaw’s Saint Joan at the Chemainus Theatre Festival in 2008, it was in Anderson’s unique perspective in Mother of the Maid that got him most excited.

“Doing Shaw’s play was a great experience, but this is very different,” he says. “It’s wonderful to be part of something that’s showing a different side of her journey and is such a wonderful take on Joan." ...

Given Pacific Theatre’s mandate to explore the “spiritual aspects of human experience”, Mother of Maid does not ignore the more enigmatic facets to Joan’s story, with her visions and divine quest just as much a part of Anderson’s retelling, as it is an examination of parenting.

“One thing I really love about the play is it questions some of this,” says Williams. “In this version, she doubts herself. She’s not this pure, saintly version that we have seen before.”