mother of the maid | responses

I'm going to do something a little different here. I'll give you snippets of a couple reviews, and then print Steven Gomez's piece in full because I think it's such a fine piece of writing. It does what critics do at their best, enhancing the value of my own experience with the writer's own rich insights about the production. It appreciates the work - not only in the sense that it finds value in the work, but also in the sense that it adds value, just as the value of a rare book or a treasured work of art appreciates in value as time goes by. 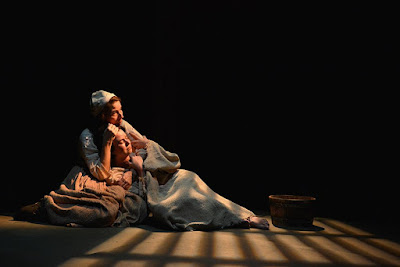 "Anita Wittenberg delivers a powerful performance. She gives Isabelle a near perfect balance of maternal love, fear, and exasperation. While Wittenberg feeds off the equally polished performances of Ian Butcher as husband Jacques and Raes Calvert as son Pierre, it is unsurprising that the biggest emotional connection comes during scenes with daughter Joan. Played with mesmerizing clarity by Shona Struthers, this emerging actor last seen at Pacific Theatre in the ensemble piece The Wolves in 2018, is one to watch. Struthers is so convincing here as “The Maid of Orléans” you’ll almost wish the playwright gave her more stage time. A welcome start to Vancouver’s theatre season. Uniquely satisfying."
Mark Robins, Vancouver Presents

"Truly great scenes... Both Anita Wittenberg as Isabelle and Shona Struthers as Joan are at their best portraying these moments of profound grief; their final scene together, as Isabelle dresses Joan for the gallows, distills the spirit of the entire play into one heartbreaking scene, pulled off wonderfully. It’s Struthers who really brings it home here, when Joan’s courage finally breaks and she just disintegrates with terror. It’s so hard to watch, and so remarkable."
Katherine Dornian, The Georgia Strait

"A powerful start to the season! Every mother of every child who charges towards independence in those glorious, infuriating and cocky adolescent years was on stage."
Lorri Romhanyi, audience

There are some complicated saints in the official canon lists. Among them is Joan of Arc, the French teenager who, if she lived today, would be labelled a religious extremist for proclaiming God had commanded her to go forth and slaughter the English. No doubt many a tourist who’s tried to ride the Tube feels the same way, but they’re not so fanatic as to do it. Joan is a complicated part of Christian history, one that tends to offend modern sensibilities when we consider her in the abstract.

So imagine what it was like to be her mother; to consider Joan not in the abstract, but as part of your own body; to have always the awareness of the umbilical cord that binds you irrevocably together, even to the stake.

Jane Anderson’s Mother of the Maid, receiving its Canadian premiere at Pacific Theatre this fall, makes that imaginative leap and then some. The modern style of dialogue is at first a bit jarring for those used to the elevated diction of a typical period piece, but it keeps us firmly out of abstractions and lets us feel the complicated reality.

Joan (Shona Struthers) tells her mother Isabelle (Anita Wittenberg) about her visions of St. Catherine as though they were having the Talk, or even as though she were coming out, and we at once know this could be our family. Someone breaking the mold is difficult for any family to take. And, as usual, the mother is the rock on which everyone stands.

What takes more strength: to march an army into battle against overwhelming odds, or to walk three hundred miles in the mud just to see your daughter at court? To let the enemy execute you as a martyr, or to bathe your daughter for the last time in her prison cell, giving her the news from home, before they take her away? By the curtain call, I had no doubt which of these women was the real martyr.

We know, of course, where the story goes. Tragedies are not known for their plot twists. But here the tragedy is not Joan’s but Isabelle’s, who is chained to the “Maid of Orléans” not by faith in her miracles or her mission, but by her own will and love. Love, says the Bible, is as strong as death. It’s a chain that cannot be broken by anything but fire, and truly not even then. It’s what gives Isabelle her strength and even her reason for being; it pulls her through the narrative and she submits with disarming matter-of-factness. She knows what love is and doesn’t balk at its demands.

The whole cast does a fine turn, with honest performances of relatable characters, and the most important role of all is also the best. Wittenberg fully realizes Isabelle’s emotional scope as she’s thrown around by “God and his bloody plans”, reminding us from beginning to end that a saint’s piety doesn’t hold a candle to a mother’s devotion. And as she screams her daughter’s name for the last time, we know with absolute assurance that she is the one being burned alive.

Reprinted from EtCetera
Posted by Ron Reed at 12:02 PM