You don't have the idea that cultural icons will be... well, people. That rock stars carry on conversations, rent videos, marry your friends, raise kids, go to church. Are nice people, in fact.

Several years back, I made friends with BCCN music critic John Cody in order to pillage his record collection for obscure Beatles covers. An eventual friendship with his eventual wife, Karen, was an unexpected bonus: not because she's Lee Aaron, but because she's... well, like I said, nice.

Anyhow, in recent years she's moved from metal rock glam queen to jazz singer, and in a couple weeks there's a chance to hear her new music and benefit a cause that's close to her heart in the bargain. Not bad. 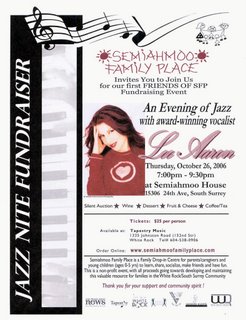 click image to enlarge
Posted by Ron Reed at 2:53 PM