In December we were fortunate to have almost 800 kids and 12 different schools from the lower mainland visit us to see THE LION, THE WITCH AND THE WARDROBE through our school matinee program. Angela Mitchell was one of the teachers from Blacklock Fine Arts School who brought her grade 4 and 5 classes to the show, and then had them write critiques after. Their responses were too intelligent and heartwarming not to share. Enjoy! 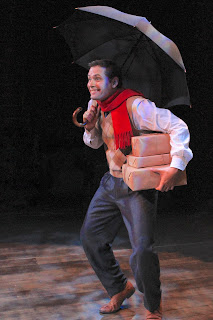 “The stage was small, but when the play was on, it seemed so big! Who knew a chair and a box could be a sleigh?” -Victoria

“When the White Witch killed Aslan they used the box because if the actor was under he would get really really hurt in his back.” -Dylen

“I liked the small stage because it felt like I was a part of the action and adventure of the play.” -Zoe

“I was astonished by the mood you get just from gels and gobos. In the death scene I was very affected because of the lighting. The lighting was kind of orangy like Aslan's fur.” -Kalina

“I loved almost all the costumes because they looked like the character they were supposed to be even without masks. I didn't really like Aslan's costume because it was just a blanket, but then again I probably should imagine more.” -Piper

“The music was amazing. I could understand the story and what was going on just by the music! I bet I could close my eyes and still know what was happening, but I wanted to see the expression on their faces because they were so amazing. I loved how the music and audio sounds blended in so much because they were constantly getting the movements perfectly on cue.” -Ariel

“The script was awesome and I can't believe that they memorized all of their lines in just two weeks! I had way less lines in the Christmas Concert last year and I took like a month to memorize them!” -Piper

“My favourite part of going to the theatre was realizing that not every theatre is big.” -Kailey

“This was the first time I ever saw a live play. I learned a lot, like different stages and how to move around in different kind of stages. I learned that it takes a lot of practice and work to put on a play. You need lights, sounds, time, money for equipment, actors, and most importantly you need dedication.”

If you are a teacher or parent and would like to bring a group of students to THE LION, THE WITCH AND THE WARDROBE , you are not too late! The show is touring to The Presentation House in April and will be booking more school matinee shows. Please contact the Presentation House Box Office directly at 604-990-3474 for information about booking a school matinee.
Posted by Kaitlin at 5:35 PM