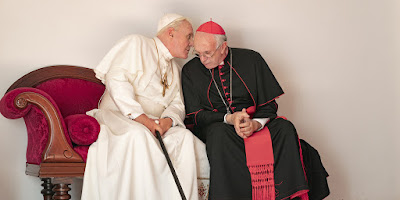 It’s 2013 and the winds of change are blowing through the Vatican. Having lived his life to the letter of the gospel, conservative Pope Benedict (Anthony Hopkins) prepares to cede the papacy to Cardinal Jorge Mario Bergoglio (Jonathan Pryce), who aims to take a more progressive approach in leading the Catholic Church and its flock of over a billion faithful. These two men of the cloth are, well, hardly cut from the same cloth, ensuring that this transfer of power will be a bumpy ride as they weigh in on - and butt heads about - their respective stands on what their fellowship requires in an era of epochal change.

Demonstrating both a keen understanding of, and deep respect for, the responsibilities that accompany such a hallowed station, director Fernando Meirelles and screenwriter Anthony McCarten (Darkest Hour) succeed in humanizing the film’s central figures, reminding us at every turn that these are fallible men trying to balance doctrine with their own world views. Unsurprisingly, much of the credit for the film’s success rests with the titanic talents occupying the headlining roles. As Hopkins and Pryce spar over the respective merits of integrity and adaptability, divinely comic sparks fly, lending the film’s insights an incandescent glow.

"What makes "The Two Popes" so delightful, other than the very funny script, is watching two seasoned actors play off each other for two hours. Both Hopkins and Pryce illustrate what the craft of acting is really about." Sasha Stone, The Wrap
Posted by Ron Reed at 11:42 AM