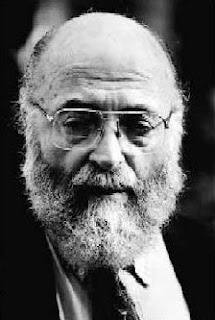 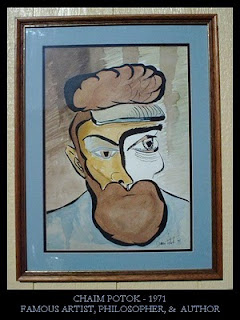 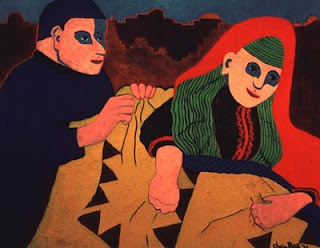 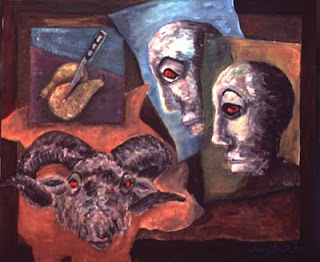 The late Jewish writer Chaim Potok (1929-2002) is probably best known for his novels, many of which explore the struggle to reconcile religion and modernity. Potok was raised as an Orthodox Jew and was ordained as a Rabbi. In his lifetime, he wrote nine novels, three children's books, and numerous stories, plays, and articles.

Potok is arguably best known for his novel, The Chosen, which was made into a film and a Broadway play. My Name is Asher Lev, which Potok called his most autobiographical novel, is the struggle of a gifted artist torn between his art and his orthodox traditions that reject art. In the front of this book is a quotation from Picasso: "Art is a lie which makes us realize the truth."

Potok was an accomplished painter, in addition to being a writer and a Rabbi. In a fascinating intersection between art and life, Potok himself created "Brooklyn Crucifixion," a painting central to the heartrending climax of My Name is Asher Lev. "Brooklyn Crucifixion" (shown at left) hung in Potok's home. (Click on thumbnail to view larger image.)

And in case you haven't read the compelling story that is My Name is Asher Lev, here's how it begins:

I am an observant Jew. Yes, of course, observant Jews do not paint crucifixions. As a matter of fact, observant Jews do not paint at all--in the way that I am painting. So strong words are being written and spoken about me, myths are being generated: I am a traitor, an apostate, a self-hater, an inflictor of shame upon my family, my friends, my people; also, I am a mocker of ideas sacred to Christians, a blasphemous manipulator of modes and forms revered by Gentiles for two thousand years.

Potok asserted that the conflict between tradition and modernity is constant and that the tension between religion and art is lifelong. His personal struggle seems apparent in "Brooklyn Crucifixion." And yet despite this seemingly agonizing struggle, Potok remained active as an artist/writer and engaged in the religion of his upbringing until his death in 2002.

My Name Is Asher Lev runs at Pacific Theatre until February 25
tickets | information
Posted by Ron Reed at 1:32 AM