introducing the cast | my name is asher lev

Here's a sneak peek at the wonderful cast that will be taking the stage in our upcoming production of MY NAME IS ASHER LEV, playing January 28-February 26.

You've seen her on our stage countless times in everything from THE LAST DAYS OF JUDAS ISCARIOT to AGNES OF GOD to HOLY MO.  She was nominated for Jessie Awards for her roles in SHADOWLANDS and ST. JOAN.  Back from spending the summer studying in New York City, we are thrilled to have Katharine on our stage once again.  She'll be playing multiple roles in MY NAME IS ASHER LEV, including that of Asher's mother. 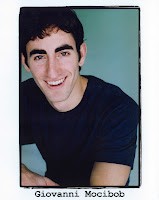 This isn't Gio's first turn on our stage; he was a part of PT's foray into the Fringe Festival this summer with his acclaimed show CONFESSIONS OF A PAPERBOY.  It is, however, his first professional show here, and his first time as a part of PT's mainstage season.  Hailing from Rosebud Theatre in Alberta where he sang and danced as well as acted his way through shows like JOSEPH AND THE AMAZING TECHNICOLORED DREAM COAT and FIDDLER ON THE ROOF, Gio will be taking on the title role of Asher in MY NAME IS ASHER LEV.
Nathan Schmidt

Nathan is making his way over to Pacific Theatre for MY NAME IS ASHER LEV from his position as Head of Acting for Rosebud School of the Arts in Alberta (seems we've snagged a few Rosebud-ites for this production).  Despite the distance, however, he has walked the boards at PT before, as Chaim Kovler in THE QUARREL.  It's been a few years, and now we are thrilled to have him back playing multiple roles in MY NAME IS ASHER LEV, including Asher's father and his mentor.
Posted by Andrea Loewen at 2:18 PM