Luci Shaw is a PT favourite. Ever since our inaugural show - First Christmas: An Entertainment, way back in 1984 - Luci's poetry has been part of our Christmas shows. Indeed, sometimes she even comes onstage to read it. Now the Image Journal announces that  Now Luci has been honoured with the prestigious Denise Levertov Award, bestowed by Seattle Pacific University. 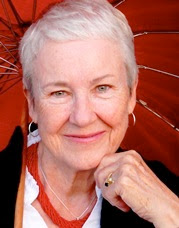 Thursday, May 16, 7:00 pm
Co-sponsored by the SPU English Department and the SPU MFA Program in Creative Writing

The Levertov Award is presented annually in the spring to an artist or creative writer whose work exemplifies a serious and sustained engagement with the Judeo-Christian tradition. Past recipients include poets Madeline DeFrees and Franz Wright, nonfiction writers Kathleen Norris, Thomas Lynch, and Eugene Peterson, fiction writers Bret Lott and Ron Hansen, and singer-songwriter Sam Phillips.

The Denise Levertov Award is named for one of the twentieth century's greatest poets. Levertov, who spent her last years in Seattle, embraced the landscape and culture of the Pacific Northwest. Her identity as a Christian believer--a pilgrim whose faith was inextricably entwined with doubt--became another important facet of her work, particularly in her later poetry.

Here are links to some of Luci's poetry that we've featured on Oblations...

Act Now To Avoid Prize Entry Forfeiture (Pending)
States of Being
No, I'm Not Hildegarde
The Wind Blows Wherever It Pleases

And a few of the pieces that have been part of Christmas Presence...