Julie Casselman was last on the PT stage in THE GREAT DIVORCE. Catch her now starring in A MOON OVER BUFFALO at the Metro Theatre. 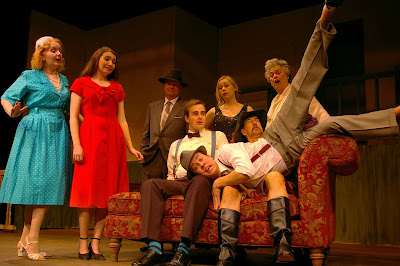 Moon Over Buffalo centres on two fading stars of the 1950's. On the brink of a disastrous split-up caused by George’s alleged indiscretion with a young ingénue, they receive word that they might just have one last shot at stardom: Frank Capra is coming to town to see their matinée, and if he likes what he sees, he might cast them in his movie remake of The Scarlet Pimpernel. Unfortunately for George and Charlotte, everything that could go wrong does go wrong as confusion surrounds everyone who enters the theatre: the Hays’ stage manager, their lawyer, their visiting daughter and her clueless fiancé, and Charlotte’s aging, deaf mother who hates every bone in George’s body. The show must go on, of course, but at curtain time one question remains: exactly which play are they performing?