We're venturing off-site in a couple of weeks, into the historic Hollywood Theatre for a night of Hollywood-style glitz! 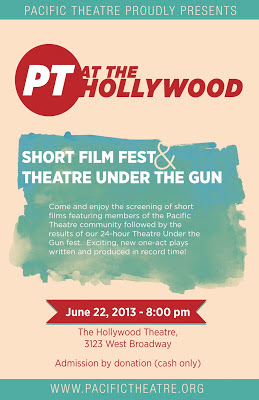 PT AT THE HOLLYWOOD
Saturday, June 22 at 8pm
The Hollywood Theatre - 3123 W Broadway

Pacific Theatre presents PT at the Hollywood, a spectacular evening of theatre and film in one of Vancouver’s most beloved and historic venues: The Hollywood Theatre.

Pacific Theatre, then, is excited to invite you to this event at the grand old Hollywood! Come and enjoy the results of our 24-hour Theatre Under the Gun fest, exciting new one-act plays written and produced in record time and designed exclusively for the Hollywood Theatre stage.

Punctuating the plays, we’ll screen short films featuring members of the Pacific Theatre community, including Craig Erickson, Kirsty Provan, Kyla Ferrier, and Giovanni Mocibob (in a film by DANNY AND THE DEEP BLUE SEA director Jason Goode). You’ve loved them on stage – now thrill to them on screen!
Posted by Andrea Loewen at 9:37 AM