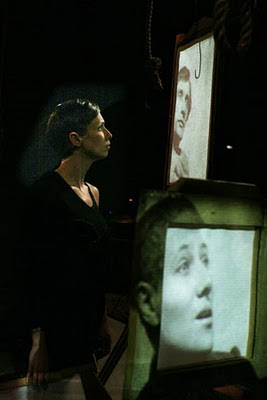 In a sense, Reid Farrington’s world runs in reverse. Most artists working with film begin with a story idea, assemble the necessary performers and sets, and wind up producing a two-dimensional illusion. But this process flowed in the opposite direction during the making of The Passion Project, an installation that the New York–based Farrington will show at Pacific Theatre from January 27 to February 6, as part of the PuSh International Performing Arts Festival.

The Passion Project recasts Carl Dreyer’s 1928 silent film The Passion of Joan of Arc as a kind of shifting sculpture. Four computer-driven projectors throw Farrington’s custom-made cut of the classic movie into a 10-foot-square space, where dancer-performer Laura K. Nicoll captures the intersecting beams on small canvases she suspends during a densely choreographed series of “tasks”, as Farrington calls them.

“That’s my way into the project,” the new-media artist and director says on the line from Lower Manhattan’s 3LD Art & Technology Center, describing both this work and his newest piece, Gin & It, which is based on the Alfred Hitchcock movie Rope. “I’m interested in executing a formal exercise. Once that’s in place, I bring in performers and have them interact with the exercise. And because of the nature of performers…they’re going to have some sort of relationship with the media and some relationship with each other that just adds to the work. And then, through watching that and running it over and over and making adjustments and changes, slowly a story—their story—starts to emerge. Once I can find that, then I start to finesse it and bring it out even more.”

In the case of The Passion Project, the exercise at the source was an act of devotion to the star of The Passion of Joan of Arc, whom Dreyer framed mostly in intense close-ups. “I saw the performance of Maria Falconetti, and to be quite honest I almost fell in love—I wanted to bring her performance back,” Farrington says of the initial impulse that came to him five years ago. “I wanted to take every frame of her from the film and then string it together, so I could just watch her uninterrupted image.”

Thus he copied the film to an editing program on his computer and was in the process of isolating the footage of Falconetti’s eerily expressive face when he saw the spatial possibilities. “I realized that since it’s a silent film, if I took out a title card between two shots of Falconetti, sometimes there wasn’t even a frame missing, so that made me feel like I was putting the film back together,” Farrington recalls, referring to the scenes in which the doomed 15th-century visionary is interrogated by Bishop Cauchon, played by Eugène Silvain. “And so then I realized that since it’s a silent film, Dreyer, to create a conversation, would take a long shot of one person and then a long shot of another, and then in the editing room he’d create the dialogue. So I said, ‘Oh, I could take all the shots of Falconetti and put them together, and all the shots of Cauchon and put them together, and now I can put these people on opposite sides of the room and they can interact, like they did when they were filmed.’ ”

The result is a gripping live reconfiguration of a film that has already taken several forms over its bizarre history: the master negative of The Passion of Joan of Arc was destroyed in a fire shortly after the movie’s release, and a later fire claimed a second version that Dreyer had pieced together from outtakes. The director’s original cut was thought to have been lost forever until a copy was discovered in 1981—in, of all places, a closet in a Norwegian mental institution where the film had been shown in the 1930s. (PuSh is also presenting a special screening of this reclaimed version on January 28 at Christ Church Cathedral, with a new score written by Vancouver-based composer Stefan Smulovitz and performed by the Eye of Newt Ensemble.)

Now, through a complex dance between computer and human that involves some 300 cues for Nicoll to follow, Farrington rescues the legendary saint from the flames once again.

“Watching that film vibrate next to a living body really brought that story back to life for me—of Joan and how she really did all of these things, all as a 17- or 19-year-old girl,” he says. “There’s something about that story that becomes more like a myth to us today, or a parable, because you don’t necessarily connect it with history, because it’s such an amazing tale. And unlike King Arthur, it really did happen. But that was through working with the medium—it wasn’t the intention at the outset.”
Posted by Ron Reed at 3:23 PM