It's arrived!  Our 2014-2015 season announcement!  There is a ton of exciting stuff coming our way next year - from the heartfelt fable THE RAINMAKER to the intellectual power play FREUD'S LAST SESSION featuring a discussion between Freud and CS Lewis.  Check it all out below, and then visit our website to subscribe now and reserve yourself a spot in this diverse, challenging, and entertaining season! 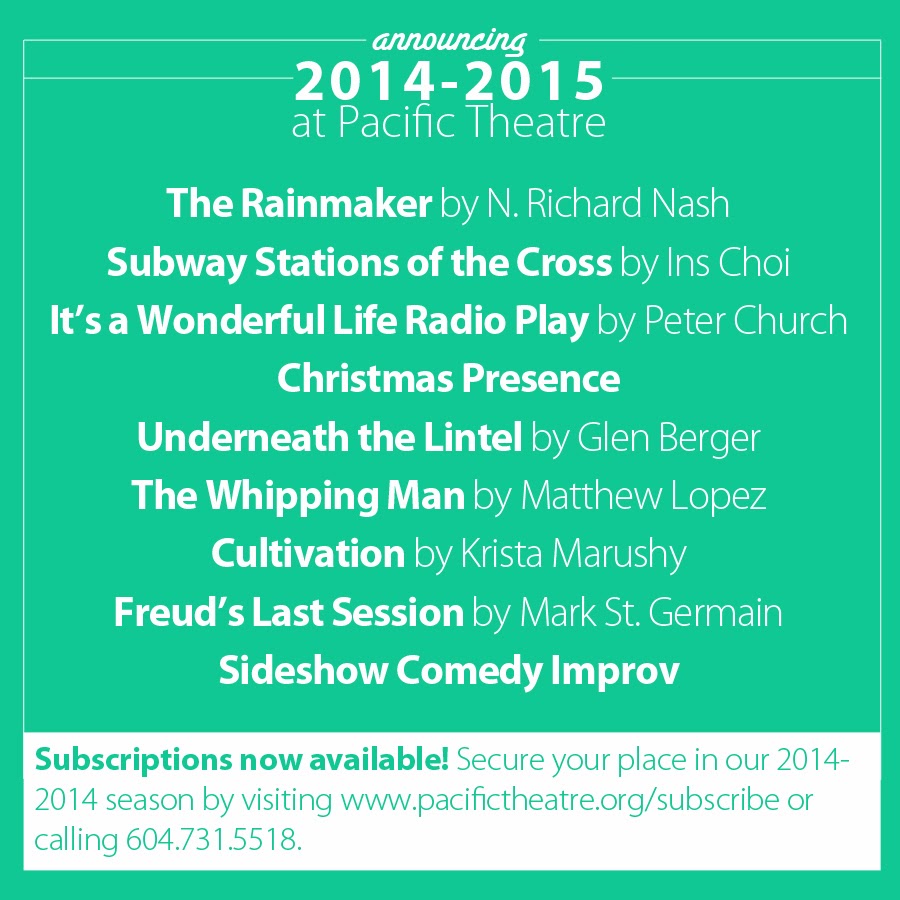 THE RAINMAKER Oct 10-Nov 1
by N. Richard Nash
Lizzie Curry’s dream of finding love is about as dry as the drought-whipped land of her family’s ranch. As if on cue, the charming Starbuck swoops in, selling the promise of rain and with it something far more dangerous – hope. A charming tale of faith and unexpected joy in barren times.
Director: Ron Reed.

SUBWAY STATIONS OF THE CROSS Nov 19-22
by Ins Choi
a guest production by Soulpepper Theatre
A homeless man stands on a cardboard platform with a message from God in this unpredictable meditation on the sacred and the everyday, told through the songs, stories, and poetry of a nameless vagabond. Written and performed by the creator of Kim’s Convenience.
Performed by Ins Choi.

UNDERNEATH THE LINTEL Jan 9-31
by Glen Berger
a guest production by Rosebud Theatre
When a reclusive Dutch librarian finds a recently-returned book that is 113 years past due, his investigation leads him to a globe-spanning obsession and an ancient ghost story. An intelligent and quirky mystery.
Performed by Nathan Schmidt.

THE WHIPPING MAN Feb 27-Mar 21
by Matthew Lopez
The Civil War has come to a bloody end. A critically wounded Jewish Confederate soldier returns to his ruined home where two of his family slaves wait, and the three men are left to sort through the sordid legacy of slavery and a new meaning to Passover.

FREUD’S LAST SESSION April 24-May 23
by Mark St. Germaine
Sigmund Freud invites CS Lewis into his home on the day England enters World War II. The result is an electrifying and enriching discourse as two of the most vibrant minds of the 20th century tackle life’s most important questions.
Director: Morris Ertman. Featuring: Ron Reed and Anthony F. Ingram.

IT’S A WONDERFUL LIFE RADIO SHOW Dec 5-20
by Peter Church
Alone and desperate on Christmas Eve, George Bailey wonders if things wouldn’t be better if he hadn’t been born at all. Tune in to this beloved holiday classic, brought to captivating life as a radio broadcast.

CULTIVATION Mar 25-28
A recently discharged soldier turns up at a church retreat but refuses to participate. His budding relationship with the pastor’s daughter brings up old secrets and the often disturbing relationship between religion and warfare. A staged reading.

SIDESHOW Oct 21, Dec 7, Jan 20, March 10, May 5
Our annual comedy show goes musical! Enjoy a completely improvised musical show inspired by your suggestion and our 2014-2015 season. This fun and family-friendly show is performed by Off Key Improv.
Posted by Andrea Loewen at 11:22 AM