And so it begins. My first day back to work after a glorious long summer away. Odd that my first work day is a holiday for normal people. But such is live theatre.

Today was the first read-through of THE FOREIGNER. A thrill akin to the playwright's feeling opening night, seeing all the characters who previously only existed in the imagination, now fully fleshed and alive. On a Saturday evening in January I told my wife that I'd love to stage THE FOREIGNER as part of our Thirtieth Anniversary Season, but was realizing I'm now too old to play Charlie. "So who would you cast in the role?" The gears spun for a while, then suddenly...  "John Voth."  And the rest of the cast came instantly to mind.

Sitting at the table this morning, there they were - the very cast I imagined eight months ago.  Well, I didn't pick a Froggy that day - the role ended up going to one of our new apprentices, Ryan Scramstad. And Peter Carlone - who did occur to me that day, as the perfect Ellard - doesn't join rehearsals until he leaves the Victoria Fringe later this week.  But John, Byron, Kaitlin, Mack, Erla...

Especially Erla. Who reprises the role of Betty, that she played back in our first season at the 12th Avenue space.


It's fitting to start this landmark season with an actress who has been a core part of this company from such early days. Heck, Erla and I even toured to churches in one edition of The Pacific Salt Company, before we moved into our swanky new digs in the Holy Trinity building. So she and I reminisced about that original production; Dirk (now touring with JAKE'S GIFT), and Francis (Henry Higgins in a summer production of MY FAIR LADY), and Pam Raven (who dropped by the office one day this spring, but I wasn't in, so I haven't seen her in maybe a decade). Molly Lyons, now in Chicago. Even Erla's husband David was involved, as one of the townspeople who make an appearance near the end of the story. 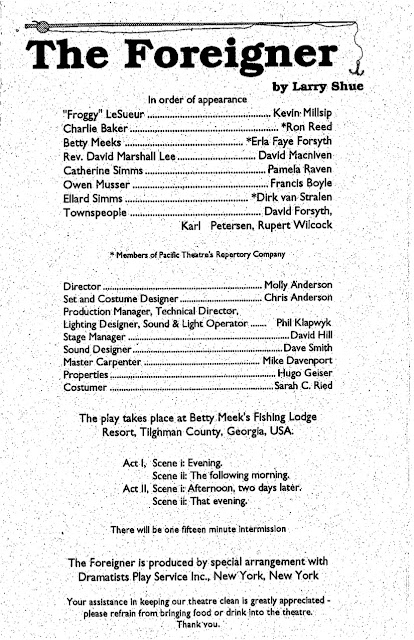 The words of the play have become Forsyth family traditions. "Running down, running down..."  "A waste of food." So too in the McPherson family: Cindy, who works on PT finances and requests a remount of THE FOREIGNER oh, every few months or so, is full of quotations. "How does one acquire a personality?"

And thinking back to that first season in the "new" theatre, I remember the whole world of PT people, besides the ones onstage. Some of them still around, still very much involved; Debra Sears, Keven Stphens, Karl Petersen, Maria Denholme. Others now far away; Kirk is in Seattle, Lisa in New York City. In fact, John Telgmann was in Timbuktu at one point. 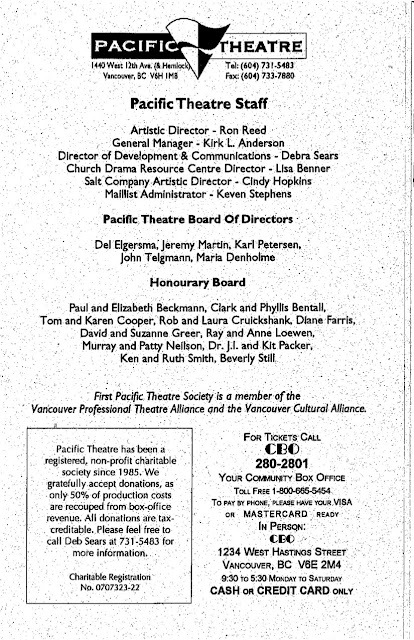 And so our Thirtieth Season begins!
Posted by Ron Reed at 5:26 PM