Here's our interview with playwright and actress Lucia Frangione on ESPRESSO. 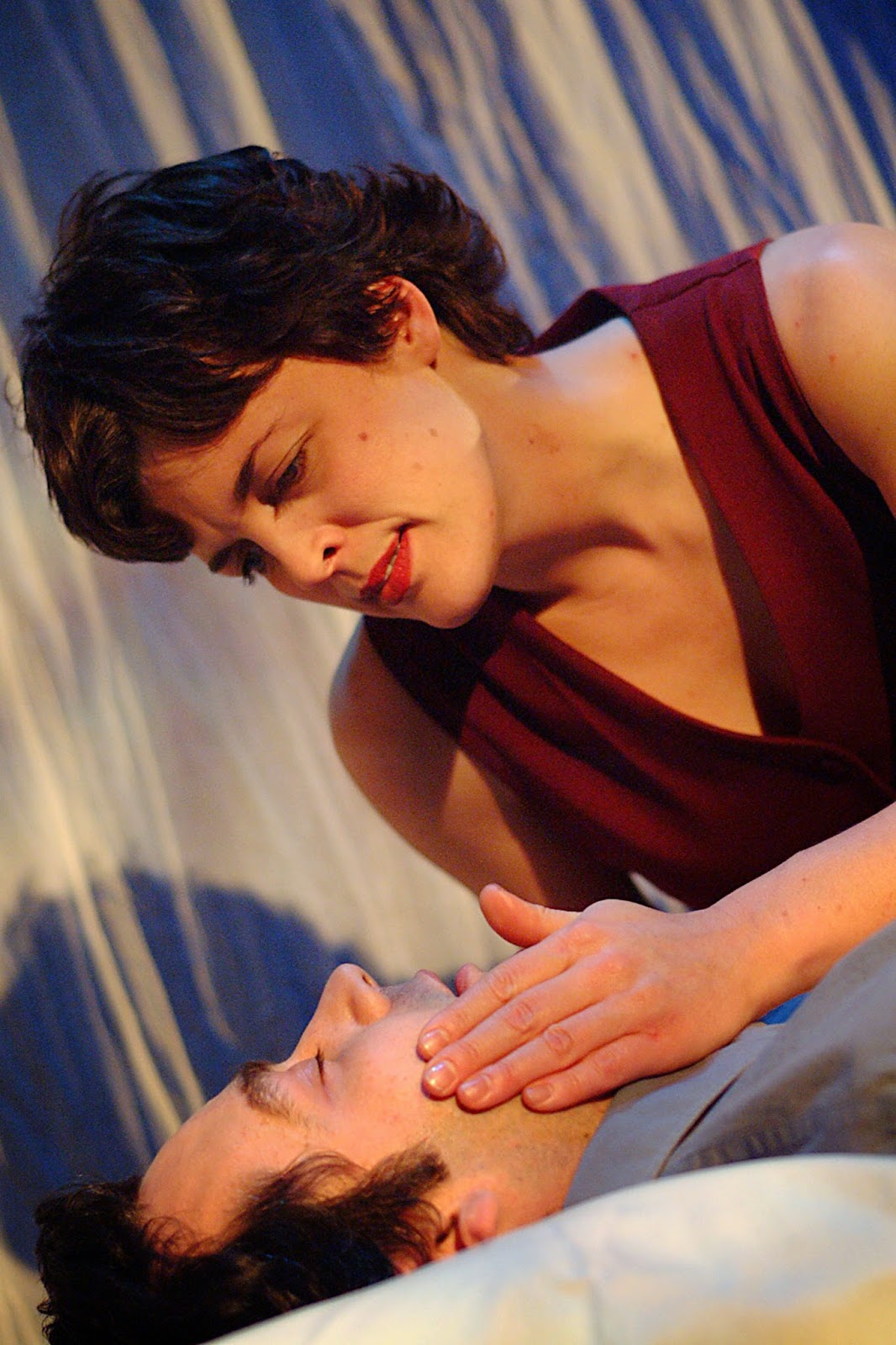 Was there a specific inspiration to start writing Espresso?

I started writing Espresso when my Dad fell asleep at the wheel and ended up in a horrific car accident, his heart lacerated. My Italian family crowded the intensive care waiting room, many of them brought food. The nurse warned us that any palpitations, any excitement of the heart due to anxiety or happiness, surprise or even sugar or caffeine, could kill him. And I thought "how horrible" and then I thought, "what a fascinating way to die..." I took down a bunch of notes, but I wasn't able to write the play for nearly ten years after that happened.

How did it get to be included in the Pacific Theatre season?

I was terrified to write this play for two reasons: one, it is inspired by events in my very private powerful family. Two, it is an exploration of the erotic side of Christ's love, the idea that the Song of Solomon is a seduction between God and us. I figured everyone might just hate my guts. It was a very risky leap for me. But I had to write it. I told Morris I thought it was too dark for a Pacific theatre show. He told Ron. Ron made it very clear to me I was not to presume what Pacific theatre programs! Haha, he was so right. Then he gave me DD Kugler as a dramaturge and some script development funding and the rest is history.

Tell me about the progression of the play since then.

The play ran at PT spring 2003 and sold out. It then ran again in the fall of 2003 and sold out again. Morris formed a company called Naked Soul and toured it to the Belfry in the spring of 2004 and the Kaasa theatre in Edmonton and Prairie Theatre Exchange in Winnipeg for Bob Metcalfe's first season as AD there. It was translated into Polish by Malgorzata Semil and was produced by teatr Jeleniogorski on the Chek border and then recently it was produced by teatr Powszechny in Warsaw and played for two years. In the latter they eliminated Amante and made the play about three generations of incest. The full story is here.

It is currently being translated into Russian.

Is a lot of the play very personal for you? What made you decide to make this personal story public and how has your experience of that been?

This was my first play with autobiographical content. It's deeply personal. But it is largely fiction. Yes, my Nonna was married at 13 and yes, her son had a car accident, and yes, she did whip back the sheets on his body and yell out in intensive care, "My God, my son!" and had to be shooed out by the nurses...but beyond some of these little true moments, I weave a fictional tale. In particular, Rosa is not me. It's almost like I plucked a different person into my body and imagined what would play out. I was a "good girl". That doesn't make for a very dramatic story! So, I invented Rosa. Also, I can't possibly presume to know how my Nonna feels, how my Dad's marriage worked...so I make it all up. I don't even try. But I'll steal a few of my Dad's real lines because he's just so damn beautiful sometimes. The way I handle autobiographical material in my plays and in my blog is: I will share my own life fairly ruthlessness when I am writing about something I have resolved. Because it always seems to do someone tremendous good - nobody has singular experience. Whatever I have gone through, thousands of others have too. And if I can put words to it, if I can help someone feel understood and known, well...that's my job. No? I will risk criticism and sacrifice pride for that. I will also share beautiful and idiosyncratic moments I experience with my friends and family. But I never expose people's dark side or their personal stories without their permission.

What kind of feedback do you get on Espresso?

People enjoy the mystery that unravels, the family story, the humour. And for some people...the play hits on a very intimate level spiritually and sexually and it seems to be an agent for change and healing. It doesn't seem to matter what gender they are, what background, what religion. I have received hundreds of letters, emails, notes, over the years, telling me how this play has changed their way of life. It's very humbling. I am grateful. And it reminds me that it has nothing to do with me. Right? I believe if we're called to write - it's because someone out there needs to hear it. To some degree, doesn't even matter how flawed the art is. And if we don't write - we leave a vacuum where our courage should have been.

What is your favourite aspect of the play as a writer?

The play immortalizes some of my favourite moments with my family. My father died ten years ago, shortly after the tour of Espresso ended. This production gives me a chance to cook with him again. To hear his voice. To hear him sing.

What is your favourite aspect of the play as an actor?

It is so deliciously fun to play all of these characters. I really enjoy the shapeshifting.
Posted by Andrea Loewen at 10:54 AM