ESPRESSO is inspired in large part by the Song of Songs (or Song of Solomon), a book in the Hebrew Bible/Old Testament. This is a unique text in the scriptures, as it references no law, wisdom, or teachings of God. Instead it represents the voices of two lovers praising and yearning for each other.  While there are many ways to look at this text, here are some of the most common interpretations and breakdowns. 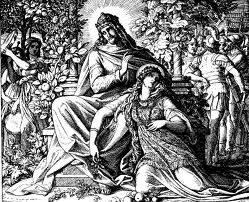 Some notes on Song of Songs/Song of Solomon


Structure of the Song of Songs