We thought we'd start off your introductions to the creative team for DANNY AND THE DEEP BLUE SEA with none other than our Danny!  So here his is, Mr. Aleks Paunovic! 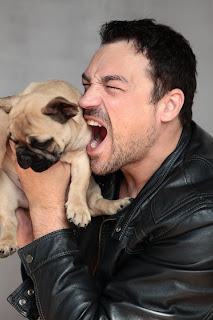 Now, Aleks might sound like a bit of a tough guy (probably because he is), but he's got a softer side too. Here's a video of him playing a little tune, proving tough guys can still sing a good ballad.

Posted by Andrea Loewen at 2:49 PM