Apprentice Maki Yi is producing and performing in the first act of Marjorie Chan's A NANKING WINTER this week. 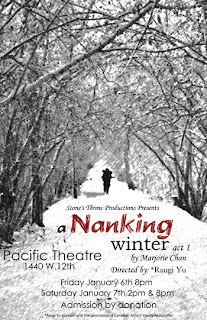 Irene Wu has dedicated years of her life to researching the invasion of Nanking, China. Through the winter of 1937, the Japanese Imperial Army led a horrific campaign through the streets of China’s capital, an event that has been left unknown and untold to the world. Irene is on the brink of releasing her research when her publisher voices doubts about the book.